Lately Charlize Theron has been really working on her action star status (if you didn’t see her steal all of Mad Max Fury Road, you should).  Atomic Blonde is based on the 2012 graphic novel The Coldest City.  The graphic novel revolves around a spy who has to find a list of double agents who are being smuggled into the west on the eve of the collapse of the Berlin Wall in 1989. 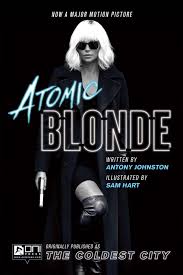 The movie follows that story pretty closely, and is also set in Berlin in 1989, just as the wall is beginning to come down.  While the spies in Berlin are desperately trying to figure out where they will fit when the wall is no longer separating countries, MI6 agent James Gasciogne is killed by a veteran KGB agent, Yuri Bakhtin.  Bakhtin steals a list (it’s always a list, the most solid of spy movie macguffins), which he hangs on to instead of taking it back to the Soviet Union – it would appear that he wants to sell it.  Upset with that prospect, and the fact that it will compromise many of their agents, MI6 sends in agent Lorraine Broughton to meet up with their rogue agent Percival to retrieve the list.  The story is told via flashback as it all takes place while Lorraine is being interrogated by both MI6 and the CIA after the fact.

Broughton explains that her cover when blown as soon as she landed, was followed by French agent LaSalle, dealt with Percival’s loose-cannon-ness, and eventually tracked down Bakhtin before he made contact with KGB associate Aleksander Bremovych.   Along the way, she and Percival learn that german agent ‘Spyglass’ has memorized the entire list, so it becomes imperative to get him out of the east to the west as well. 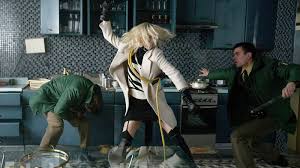 If that all sounds a bit confusing, it is, but only a little.  The plot is actually pretty thin but that’s fine, because the focus is the action.  The movie is directed by David Leitch, who co-directed John Wick, and because his career started as a stunt performer and coordinator, the action is spectacular.  The chase scenes around the city are interesting, but what is particularly fantastic are the hand to hand combat sequences.  Leitch really knows how to shoot fight scenes, from enough of a distance that you can see the entire fight, and trying to keep the cuts to a minimum. 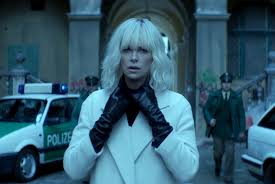 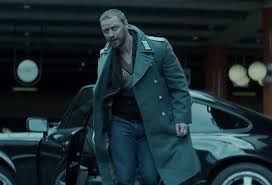 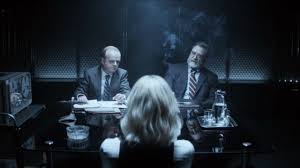 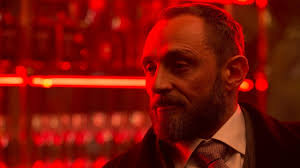 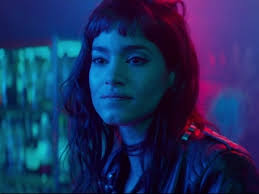 I really enjoyed the movie, even if the story was weak, because the action was so strong.  It’s not too long, and the end made me curious what Broughton would get up to next. 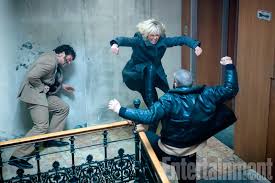 Bonus – the movie did remind me a lot of Long Kiss Goodnight.  If you haven’t seen that in a while, go back and check it out.  Geena Davis was doing a bunch of ass-kicking quite a while ago.

Posted by Jeanette Ward at 9:35 AM