I will say the same thing about this movie that I said about its predecessor. The Fantastic Beasts themselves are lovely, and it’s amazing to see them on the big screen, as well as Eddie Redmayne’s fantastic performance as Newt Scamander.  Scamander loves these creatures, and operates better with them than he does with people.  As for the rest of the movie, it’s cluttered, choppy, complicated, and feels like a lot of filler between the first one and the next one.  Let’s see if I am capable of summing up the plot. 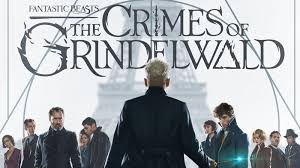 The Crimes of Grindelwald begin with Gellert Grindelwald in American wizard prison, after he turned out to not be Colin Farrell in the previous movie.  However, it seems he wasn’t in prison – or he was, but his henchman looked like him? In any case, he escapes during his transfer from America to England, and heads to Paris.  Meanwhile, Newt Scamander is hanging out in England, collecting and caring for Magical Creatures while writing a book on them.  His older brother Theseus is trying to get him to come work at the ministry with him so that he can get his travel ban lifted and they can go after Grindelwald in Paris. As much as Newt wants the travel ban lifted (he wants to meet back up with the lady he fell for in America, Tina), he won’t work for the ministry.  Theseus and his lady love Leta Lestrange, who is clearly more into Newt, are preparing for their mission while a young Albus Dumbledore, who is teaching Defense Against the Dark Arts at Hogwarts, meets up with Newt and begs him to go to Paris as well.

Apparently, Grindelwald is in Paris to get Credence Barebones, because his Obscurus parasite is super powerful and can kill Dumbledore, and Dumbledore is the only thing standing in Grindelwald’s way of ruling. At least, I think that’s his plan. He’s attempting to unite multiple people to his cause, and is being very successful, but believes only Dumbledore will stand in his way.  Dumbledore tells Newt pretty much the same thing, but admits he cannot do anything about it and it has to be Newt. It seems that when they were young, Grindelwald and Dumbledore were in love (this is not stated in the movie, it’s just strongly insinuated) and made an unbreakable vow that they would never fight each other.  So, Grindelwald needs Credence to defeat Dumbledore, and Dumbledore needs Newt to try to ‘save’ Credence.
If this all seems very complicated, please bear in mind that I have not yet mentioned how Queenie enchanted Jacob, and is slowing getting entranced by Grindelwald’s message.  Leta is having some serious guilt issues because it’s hinted that Credence may actually be her long lost brother, even though she knows that is not possible. And her half-brother Yusuf Kama has vowed to kill Credence for destroying his family.  And, on top of that, there’s the introduction (or maybe re-introduction?) of Naigini and the surprise (spoiler) appearance of Nicolas Flamel. 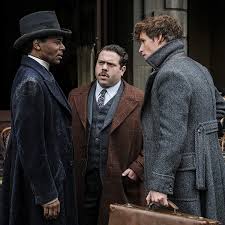 Look, it’s all very ridiculous and you need some serious notepads to keep track of everything and everyone.  Again, the best parts are Newt interacting with creatures, and while there are quite a few (The Zouwu is amazing), there are not enough.  There is far too much standing around talking about bloodlines, families, and whether magic folks should be ruling non-magic folks.  David Yates has done multiple Harry Potter movies, and two of these, so he definitely has a feel for them. His Harry Potter movies always felt choppy to me, but I always assumed that was because he was visualizing a book, and so had to cut out a great deal.  Here, however, there’s no book – just original material written by J.K. Rowling.  The cast is certainly entertaining, and does their best with the material at hand. 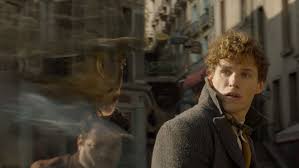 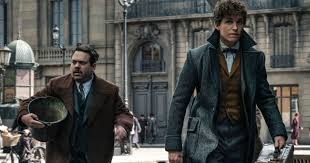 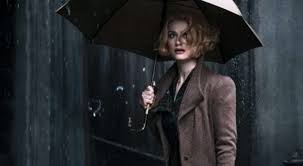 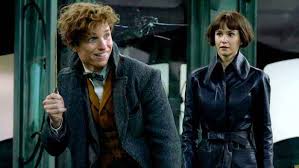 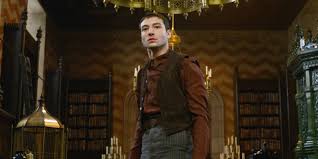 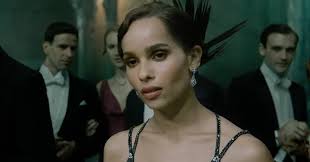 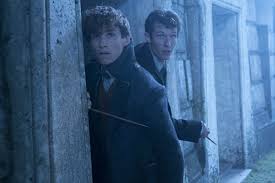 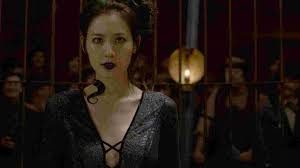 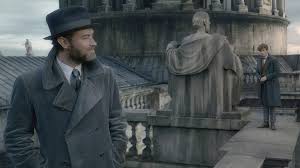 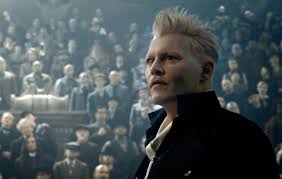 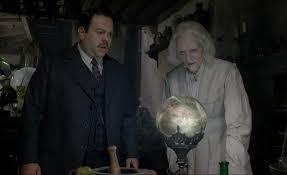 Overall, the movie is just fine, and for the fans who are absolutely entrenched in the Wizarding World – they know the families, the bloodlines, the items, the side characters, this movie will be perfection.  I found it to be a little cluttered and disjointed, but entertaining nonetheless.
6 out of 10.
I am looking forward to the inevitable showdown between Depp and Law - that could be very interesting.
Cast Interview Fun:

Posted by Jeanette Ward at 1:02 PM No comments:

Email ThisBlogThis!Share to TwitterShare to FacebookShare to Pinterest
Labels: Fantastic Beasts The Crimes of Grindelwald: 6/10 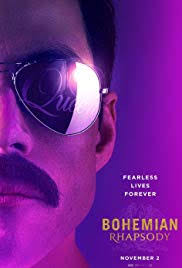 I first became aware of Queen when I fell in love with the 1986 movie Highlander. It has always been one of my favorites, and a lot of that is because of the music.  That carried over into the Highlander TV show.

There have been a lot of rumors of a Queen or Freddie Mercury biopic for many years. Supposedly Sacha Baron Cohen was close to portraying Freddie Mercury, but left the project after clashing with the remaining members of the band about how certain aspects of his life should be depicted.  Cohen wanted to delve deep into Freddie’s sexual ambiguity, and the band wanted to focus on the music.  Ben Whishaw was also mentioned as a possibility, but finally Rami Malek took on the project, and Bryan Singer began the direction (he did not finish), and the movie approached the finish line.

Bohemian Rhapsody follows the story of Queen as they form in 1970 when Farrokh Bulsara joins the former members of Smile, Brian May and Roger Taylor to form a new group.  Together, they pick up bassist John Deacon, and start touring as Queen.  Forrokh changes his name to Freddie Mercury, and the band begins to pick up steam as tour and record, gaining popularity through their energetic live performances.  They create a lot of different sounds, making a point to try everything.  Eventually, Freddie develops some standard ‘front-man’ syndrome symptoms and they have a falling out.  Freddie gets caught up in his solo career, drugs and alcohol and a shady business manager.  Eventually, Bob Geldof wants Queen to come perform at Live Aid in 1985, Freddie gets a visit from his best friend Mary, and realizes it’s time to turn everything around.  He reconciles with the band, looks up his love Jim Hutton, comes out to and reconciles with his family – all just in time to perform an incredible set at Live Aid. 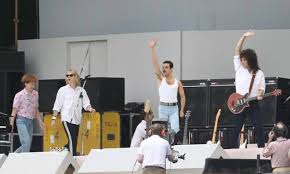 Now, if you are a fan of Queen, there is no new information in this movie.  I did not have a problem with that, honestly, I was mostly there for the music.  Yes, it is definitely a bio-pic and not a documentary.  Certain timeline things are shifted around to provide for the most cinematic drama possible.  Freddie had already known the guys prior to joining the band, there was no meet-cute in the parking lot after one of their shows.  While the band bickered, they never fell apart like in the movie – in fact, they had been touring together up to two months prior to Live Aid.  And, apparently Freddie received his AIDS diagnosis years after Live Aid, not just before as the movie depicts.  I don’t really have an issue with those shifts, it is a movie, after all, and they help the flow.

The movie is listed as being directed by Bryan Singer, however, he did not finish the movie. Apparently, he was late several times, sometimes not showing up at all.  He stated it was family health issues, but when Rami Malek took exception to it, they had several fights. Dexter Fletcher came in to finish the picture. Even with that, the movie is perfectly serviceable with a decent cast. 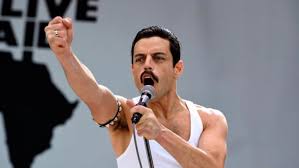 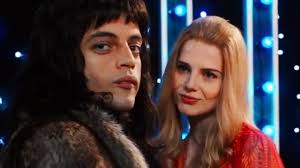 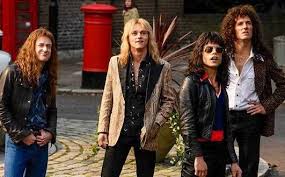 Some of the criticism of the movie is that it is a very ‘sanitized’ version of the story. Yes, Freddie’s rampant sexual history is touched on, but not deeply. The movie hints that he was into drugs, but that is never really shown.  Freddie died in 1991 of AIDS-related complications, and was the first major celebrity to die of the disease.  He kept his diagnosis secret for years, in fact only admitting publically the day before he died.  He never wanted to be ‘poster-child’ for the disease, he just wanted to keep making music.  I know the remaining members of the band are very careful to preserve Freddie’s legacy, and make it more about the music than the various levels of debauchery that were present. I did not have a problem with that, and did not mind this PG13 version of the story - also, I personally enjoyed the amount of attention paid to Freddie's cats.  Framing it around the performance at Live Aid was a good choice, and makes sense in the context of the story. 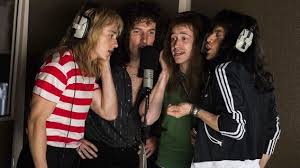 If you like Queen, check it out. If you know nothing about Queen, know that this is a movie, not a documentary, but it is definitely enjoyable.

7 out of 10 – The music is fantastic. Also – keep an eye out for Adam Lambert’s cameo in the front as the flirty truck driver.

Curious how well Malek did?  Check it out -

Posted by Jeanette Ward at 12:28 PM No comments: