Disclaimer – in no way do I support any kind violence towards sharks, because the majority of them are endangered and need our support because they are key to healthy ocean eco-systems.  On the other hand, terribly CGIed sharks that are chomping as they fall from CGIed tornadoes … 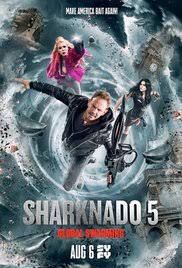 If you’re not familiar with the Sharknado series that airs on SyFy, let me see if I can sum them up for you.  In the first movie, bartender and former surfer Fin Shepard collected his family with the assistance of his employee Nova as he went through Los Angeles evading a sharknado.  What is a sharknado? I’m shocked you have to ask – it’s exactly what it sounds like – a tornado filled with sharks.  Why?  In the first movie, due to global warming side effects, sharks were massing in large amounts off the coast of L.A., and a hurricane spun off several tornadoes – which picked up sharks from the ocean, and rolled through the city, periodically dumping sharks here and there, which then chomped through random celebrity cameos and extras.

In the second movie, Fin and April reconnected, and traveled to New York, which was of course then hit by a sharknado.  In the third movie, the sharknadoes got so big they took over the eastern seaboard, most notably hitting Universal Studios in Florida, which led to several hilarious shark landings.  In order to defeat it, Fin teamed up with his father, Gil, who worked for NASA, to suck the sharknado up into space – this resulted in two amazing things, Gil got stuck on the moon (don’t worry, he got back in time for the fourth movie), and pregnant April got swallowed up by a space-going great white, Fin went in after her and April gave birth to their son in the belly of a great white as it fell back to earth, seriously. 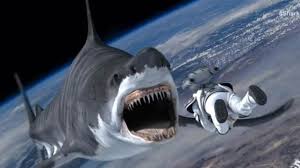 Because she was mostly crushed by space debris, the fourth movie picks up with April’s crazy inventor father reconstructing her into a cyborg, while Fin, his cousin Gemini, and his son Gil battle a sharknado through Vegas, which then splits into several ‘nadoes, all picking up different things as they spin across the country (firenado, oilnado, cownado – you get the idea).  The movie ends with the family reunited and reconnecting with Nova as she informs them Sharknadoes are now worldwide.

That leads us to the beginning of Sharknado 5: Global Swarming.  Nova is spelunking in a cave under Stonehenge, and contacts Fin for assistance. Fin, April, and son Gil are hanging out with the prime minister of England (no, I'm not entirely sure why they are hanging out with the prime minister).  Fin heads off to help Nova, and April and Gil meet a Q-style tech genius who gives Gil a helmet that will protect him, even from Sharknado-level winds. 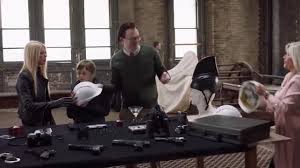 Meanwhile, Fin and Nova have an Indiana Jones-style excursion to snag a shark-fin stone with a gem in it, and learn from pictograms on the wall that even ancient druids were battling mystical sharknadoes.  Guys, the sharknadoes are mystical!  After they remove the stone (never remove the stone), a huge sharknado appears out of nowhere, and wipes out most of London.  And that was just the cold open.  You then get the awesome theme song and animated credits sequence.

Since Gil was sucked into the sharknado, April and Fin set off on a worldwide quest to figure out what the stone means, and how to use it to not only defeat the sharknadoes, but use them as teleporting devices to get all over the world! That’s right, not only are the sharknadoes mystical, but Fin and April can use the stone to summon and then use them transportation.  They go from London to Australia – where they meet Nova’s collection of Sharknado Sisters – a group of women that Nova had collected to battle Sharknadoes wherever and whenever they appear – and who apparently configured the Sydney Opera House to a battleship (no, seriously, that happens). 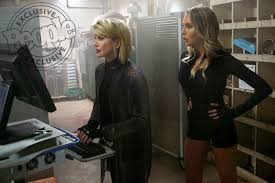 After some of her group help rebuild April, they end up in the Alps, then in Brazil, then in Rome (where they met the pope, who gives Fin a holy chainsaw and have to reclaim the stone from Greg Lougainis), then finally in Egypt – now, I may have gotten some of that wrong in terms of the order, and I may have missed a stop or two.  Fin and April were terrible at traveling by Sharknado and it was tough to keep up! 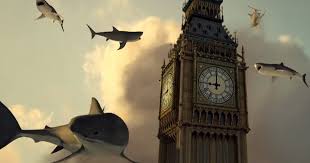 Fin’s cousin Gemini is one of Nova’s Sharknado Sisters based in Japan, and a Sharkzilla rolls through Tokyo.  What’s a Sharkzilla?  It appears to be a giant shark shape made up of smaller mutated sharks that mutated when they spun off a sharknado and rolled through some nuclear waste leftover from the previous movie. You heard me right, it’s a literal spin-off. 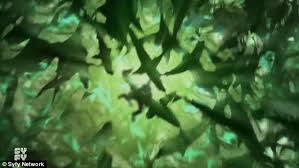 Anyway, while in Egypt – Fin and April discover more ancient artifacts, and a device that turns off the sharknadoes, but only after losing both Gil and Nova.  That seems to work, but then for some reason that I missed, something goes wrong, and a massive sharknado storm spreads over the entire world.  April is able to dissipate it, but only by sacrificing herself.  This leads to Fin walking through an apocalyptic nightmare landscape with her head in a bag (yes, her head in a bag - remember, she's mostly cyborg) when he is finally tracked down by Dolph Lundgren in a time traveling jeep (you also read that right, Dolph Lundgren in a time-traveling jeep) who tells Fin that he is Gil from the future, and he needs his help to set all this right.  Wow, that sentence was crazy.  With any luck, Sharknado 6 will be the two of them using time travel to reset everything! 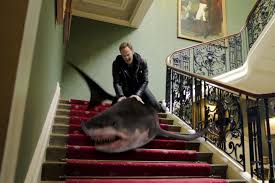 The movie is once again directed by Anothony C. Ferrante (he directed all the previous installments), and somehow, he manages to continually up the crazy.  I was not sure how he was going to go from the insanity of various types of ‘nadoes in 4.  He does it by spoofing several genres: Indiana Jones and Bond, etc.  He also does it by shifting back to focusing on fighting the sharknadoes themselves, as opposed to hilariously battling sharks in crazy situations as they have landed after being dropped out of a sharknado.  I actually really appreciate that aspect, as we’ve seen people slapping sharks around and getting eaten by sharks as they fall all over the place.
I also really appreciated the added mystical element, and that you can teleport through sharknadoes, because why not?  I liked the addition of the ancient “shark god” aspect, but wanted a little more there.  After all, I’m pretty sure King Shark from the Flash TV show had some time off and could have played that part.  Yes, I wrote that sentence as if King Shark were real.  I have a thing for him and his sexy shorts. 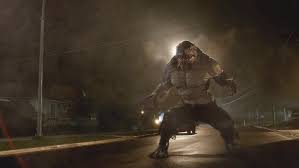 In any case, the movie is complete and total nonsense, and it was endlessly entertaining. 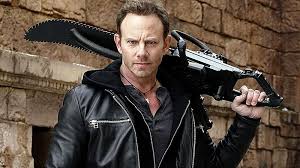 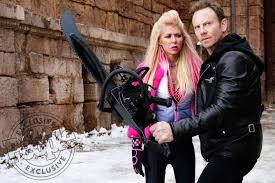 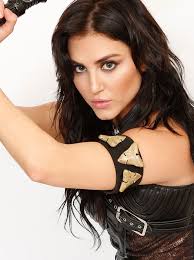 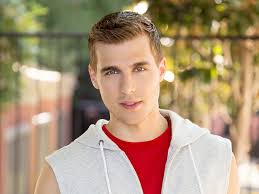 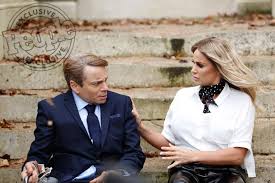 Overall, it is total and complete nonsense, but I actually liked it better than the fourth.  Enjoy the silliness, and remember, the science is sound.

10 of 10 – because really, these movies exist outside a normal grading scale.  It will be replaying for some time on SyFy. Do yourself a favor, turn off your brain and give it a watch, you’ll laugh out loud more than once!

Posted by Jeanette Ward at 9:08 AM