This is a pretty spoiler-free review.  If you want a really spoiler-y one, check the LAMBcast review, which I participated in, we broke down the movie, scene by scene!    https://www.podomatic.com/podcasts/lambcast/episodes/2018-04-30T10_25_33-07_00 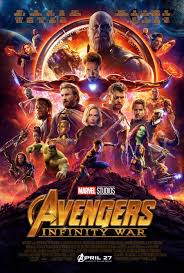 The original Infinity Gauntlet comic storyline was a limited series released the second half of 1991.  It was a huge crossover event, featuring characters from many individual comics interacting with each other to attempt to defeat Thanos, the Mad Titan, who was determined to collect all six infinity gems (soul, space, time, power, reality, and mind), put them in his gauntlet, and win over the heart of Lady Death through some amazing feats.  I did read the comic years ago, but found it to be a little difficult to wrap my brain around, as it deals mostly with Marvel ‘Cosmic’ heroes and the infinite abilities and strangeness of the universe.  Thanos also seemed very one-note and not all that interesting. 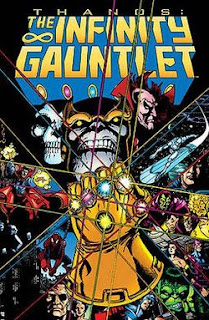 Ten years ago, Marvel took a huge leap in their movie-making division and created what would come to be called the MCU – or Marvel Cinematic Universe – with the release of Iron Man.  Directed by the guy from Swingers, Jon Favreau, and starring Robert Downey Jr., who was just beginning to get his life back on track after a series of odd substance-abuse related problems, no one was really sure how things would go – no one except Kevin Feige, the man who would become the President of Marvel Studios, and who had a several-phased plan for Marvel movies.

It was a huge success, and lead to building the Avengers, Earth’s Mightiest Heroes.  The MCU set a president by casting great people who are interested not just in doing good work, but helping each other create the strongest possible stories, and hiring interesting directors, who understood that their individual stories would help build a large universe.  Eighteen movies later, we have finally arrived at the finale of phase 3, something we have been building towards for the last ten years – Avengers: Infinity War.

The story mirrors the comic story somewhat: Thanos, the big bad first introduced in the Avengers in 2012, has finally gotten tired of trying to hire folks to collect the six infinity stones for him, and sets out to do it himself with the assistance of his Black Order.  Incidentally, the Black Order has some of the very best names ever – Ebony Maw, Proxima Midnight, Cull Obsidian, and Corvus Glaive.  Thanos is obsessed with restoring balance to the universe, which seems like an innocent enough goal – after all, he’s concerned about exponentially expanding populations on inhabited worlds while the resources diminish or cannot supply the growth.  It’s something we should all be concerned about, so that makes sense.  However, his plan is to collect all six stones, then use the gauntlet to eliminate half the living beings in the universe with the snap of his fingers.  Half of everyone!  Okay, so his concern with the issue makes sense, his solution is a little terrifying. 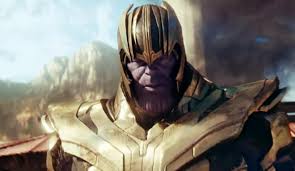 The movie opens directly where Thor Ragnarok ends, with Thanos’s ship appearing above the Asgardian refugees, and Thanos taking the tesseract – or Blue space stone – from Loki.  He tells us he’s already taken the purple power stone from the Nova Corps on Xander where it was left by the Guardians of the Galaxy on their first outing.  Then he plans to head to Knowhere to get the red reality stone, or Aether, from the Collector, and he’s going to send the Black order to earth to collect the yellow mind stone from Vision’s forehead and the green time stone from Dr. Strange’s neck.  He doesn’t yet know where the orange soul stone is, but he knows someone who does.

From this point it’s really impossible to say anything else about the plot – and literally what I have said so far is the first 10 minutes of the movie.  This story jumps off from the word go, and does not let up.  If you are a fan of the MCU at all, you will love this.  It is directed by Joe and Anthony, the Russo Brothers, who previously directed two of my favorite MCU movies, Winter Soldier and Civil War.  This absolutely feels crafted by and for fans. The Russos manage to do some amazing things with this movie.  In a story that includes almost 70 characters, each one is given their moment, and no one feels shorted. The action set pieces are absolutely incredible, and the fight scenes with different heroes working together who have not previously are astounding. The stakes feel real, and yes, the story is heavy, but they still find the time to have several humorous fun moments – especially when teams of heroes who have not yet met first encounter one another.  I could watch the over-sized egos of Dr. Strange and Tony Stark snipe at one another for hours.  I could also watch hours of the Guardians of the Galaxy meet other heroes. 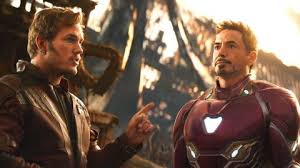 The story was written by Christopher Markus and Stephen McFeely, and they managed to do something I was really not prepared for – they make Thanos layered.  As I said, in the comic, I found him boring and one-note.  This movie is really a Thanos movie – he is the star – everything else happens around him.   The writing, plus the incredible visual translation by the Russos and the amazing performance by Josh Brolin actually give Thanos a few moments where he is a sympathetic character, where he mourns the sacrifices he has made to get to this point, and where his goal seems almost noble (almost). 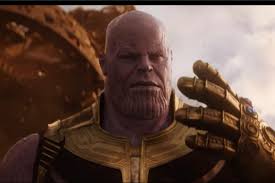 The Avengers are all fantastic – and while they all get some time to shine, there are just a few who have stand out moments – 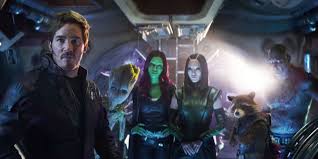 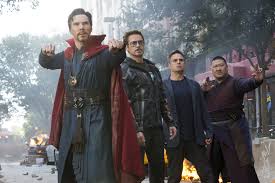 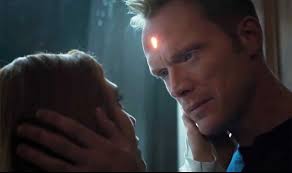 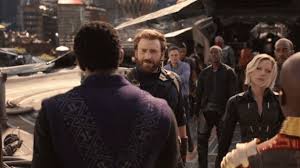 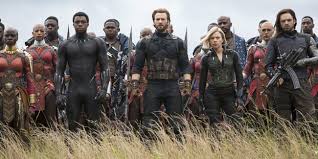 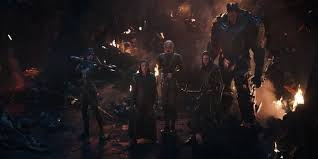 Overall, if you loved the movies up to this point, you will love this one. If you were a casual fan of the others, and maybe haven’t seen all of them, parts of this will be overwhelming and confusing.  If you haven’t seen any of the others, and are going into this cold – you won’t enjoy it as much, but there is still plenty in it that you will like.  Yes, it’s long, but I didn’t feel the length.  Thor getting his new weapon was the only bit I felt that dragged a bit, so I would have trimmed that down, but everything else moves quickly, even the quieter moments.  The story is impressive, the cast overwhelming, and the weight of the finale real.  Now, slight spoiler here – yes, it has a very Empire Strikes Back type ending, but no worries, Avengers 4 will be out in a year’s time, and between now and then we have Ant Man and the Wasp in July and Captain Marvel in March.  Guardians 3, Black Panther 2, and Spiderman 2 are all confirmed, and there are many other MCU movies in the works.  So, yes, this one ends heavy – but no worries!  Everything will be okay – ish.