For the ongoing special LAMB Devours the Oscars series - where members dive into each of the Oscar categories - I chose the Production Design category.  You can check out the other category articles here - http://www.LargeAssMovieBlogs.com.
The Oscar for Production Design recognizes achievement for art direction in film. It was originally named Best Art Direction when it was first awarded in 1929, but changed to ‘production design’ in 2012.  Basically, it’s the award for the quality of the ‘look’ of the film in terms of sets and sites – as opposed to cinematography, which is how the camera moves through those sets and sites.
If you leave the theater thinking, “Wow, that movie really looked amazing, and each set really enhanced the story without overpowering it!” thank the production designer.  If, on the other hand, you leave the theater thinking, “That whole movie looked like it was shot on poorly lit sound stages, in fact, I think I saw the sound stage wall in that scene that was supposed to be set in a forest!” or “That office set had so much stuff in it I was completely distracted from what the characters were doing and saying!”, then you should blame the production designer.
Past winners include, Mad Max: Fury Road (2016), Grand Budapest Hotel (2015), The Great Gatsby (2014), and Lincoln (2013). Officially, La La Land is the front runner in this category, but all five of the movies nominated have some really lush sets and fabulous design work.
Arrival’s production Designer, Patrice Vermette, had to create both the aliens and their language.  He wanted it to be circular to fit the movie’s theme that time is nonlinear with ‘no beginning and no end’.  He researched pictographs and hieroglyphics to ensure that the alien language looked like nothing seen before.  With the assistance of his wife, they created the ink blot looking circular language.

At this stage, it’s very tough to come up with an alien design that hasn’t been seen before, but the ‘heptapods’ are just different enough, basically looking like space squids.  The ship is smooth and stone-like, and I loved the gravity inversion as people entered the ship, that was a unique touch.  The ship and aliens themselves are fairly monochromatic, allowing the focus to be pulled back to the human stars, or star, of the film, since really the movie boils down to an emotional journey for Amy Adams’s character.  The look is clean, simple, and definitely enhances the story. 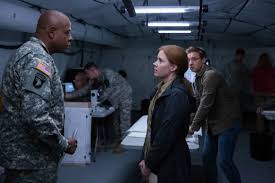 In Fantastic Beasts and Where To Find Them, production designers Stuart Craig, Anna Pinnock, and James Hambridge had to bring to life new aspects of author J.K. Rowling magical world.  Their advantage and disadvantage is that everyone is already familiar with the world of Harry Potter, but this story added the additional layer of a 1920s New York setting.  The streets and people of the ‘real world’ are all sepia and grays, so that when the magical world is entered, the difference is extremely obvious. 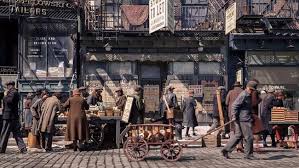 The costumes and streets and buildings were all lovely, but for me, the very best part was inside magizoologist Newt Scamander’s case with his magical creatures.  The colors were phenomenal, the creatures were beautiful, and it was easy to get swept up into the awe of the look of them.

Hail Caesar’s production designer, Jess Gonchor, has worked with the Coen Brothers on six movies, so at this point, they have a bit of a shorthand and can quickly convey what they need.  Since this movie takes plays mainly on the back lot of Capitol Pictures Movie Studio, Gonchor looked through boxes and boxes of old photographs in the MGM archives. 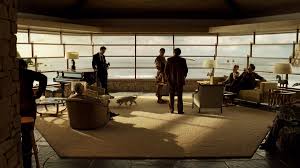 Seventy-five percent of the sets were built from scratch, allowing the actors to really dive into the 50s feel of the sets and locations. However, while the sets were incredible, they were based on reproductions of earlier actual items, so I feel they were executed well, but there’s not as much creativity needed for this film. 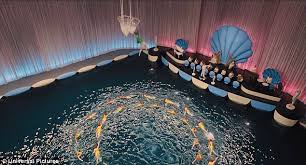 La La Land is an original modern musical telling a love story in Los Angeles.  For production designers David Wasco and his wife Sandy Reynolds-Wasco, they attempted to use as many real-world locations as possible, with some minimal set dressing.

They’ve previously done The Royal Tenenbaums, Pulp Fiction and Reservoir Dogs.  Working with director Damien Chazelle, they used different color palates to enhance character development.  Mia’s world is an explosion of colors, Sebastian’s is more black and white – influenced by old jazz photography.  The opening number on the street is amazing and really pulls you into the story with all the dancing and bright colors, but personally, I really enjoyed the shifting sets at the end of the movie during what I would call a ‘fantasy flashback/alternate storyline’ sequence. One of the characters reimagines some of the movie and all of that is done on actual sound stages with moving set pieces. It’s lovely, and really clarifies the non-reality of those moments. 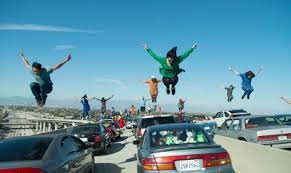 In the science fiction story Passengers, production designer Guy Hendrix Dyas created an array of epic sets within the spacecraft Aurora. The ship itself is three blades spinning around a central core. 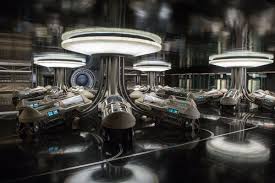 Dyas went with a luxurious, futuristic look but tried not to look at other science fiction in order to keep the look fresh.  Instead he found influences in art and architecture, including paintings from Edward Hopper.  He also made sure that each different room would have a different look. 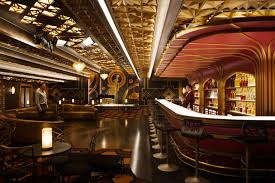 Personally, I would have nominated Doctor Strange’s production designer, Charles Wood.  I thought shooting scenes in Nepal to bring to life the look of Kamar-Taj was inventive, and the look of the Sanctum Santorum was stunning. However, a large amount of that movie is CGI on greenscreen, and that often will cause the Academy to overlook the production design that was present. 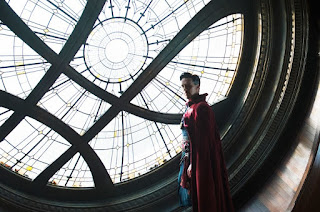 In terms of the nominated movies, I think the language and aliens from Arrival are phenomenal, and the Fantastic Beasts and the case they live in were mind-blowing – however, La La Land seems to be unstoppable.  I’m discounting Hail Caesar because while the sets are lavish-looking, it’s a recreation of a past environment. Passengers is beautiful, but in creating a separate look for each room, it ends up lacking a bit of unification. I would prefer that Fantastic Beasts win the category, because I’m always a bit more partial to creating something that has never been seen before over enhancing things that are already there (still upset that Starship Troopers lost to Titanic on that front! Plus, come on, that niffler was adorable, and now we all want our own Bowtruckles).

My official prediction for your office pool is that La La Land will take this category.
Posted by Jeanette Ward at 8:18 AM