Spoiler Alert - we win.
It’s been 20 years since the original Independence Day.  It was released Fourth of July weekend in 1996, and became a huge summer hit.  It told the story of a random group of people brought together during an alien attack.  Simple enough – but insanely watchable due to the amazing effects and great cast who were just charming enough to really make the audience care about the characters and get wrapped up into the story. 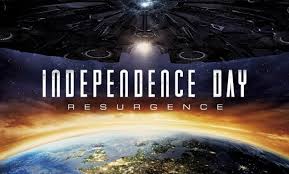 Humanity is almost completely united, a bit overconfident, and has spent the last 20 years readying for the aliens to return.  Area 51 has become a huge base with an alien prison. After all, when all their ships crashed in 96 after we destroyed the mothership, we had to put the prisoners somewhere. From what I could tell, they’ve basically been comatose for the last 20 years.  The President is prepping her speech.  Pilot Jake Morrison is working on installing a huge cannon on the moon that will help defend us, should the enemy return.  Jake is important to the story because he’s engaged to Patricia Whitmore, daughter of former president Whitmore (who seems to be going a little crazy) and now aide to current President Lanford. Dylan Hiller (son of Capt. Steven Hiller – the hero of the first movie), is leading the ‘legacy’ squadron of fighter pilots and they are preparing to head up to the moon base to fly the flags of the united countries for the ceremony.  Choppily added in to this is a backstory that involves Hiller being angry at Morrison for almost getting him killed during a training mission – something Hiller is particularly sensitive about, as it is stated that his father was killed on a test flight training mission.

On top of that, David Levinson (the other hero from 96) is traveling to Africa to meet the warlord who has been leading his people in a ground battle with the aliens for the last 20 years, since one of their ships actually landed there prior to the mothership being destroyed years ago.  Floyd Rosenberg (no idea what his job is – some sort of federal paper pusher?) and Catherine Marceaux (psychologist) are there as well, and Dikembe Umbutu – the warlord, tells them they’ve been able to win the ground battle by realizing you have to kill the aliens from behind – as the foot soldiers are still in their larger, tentacled bio-mechanical exo-suits.  Levinson and crew head inside the ship and realize it sent out a distress signal.  At the same time – the prisoners suddenly wake up and start screaming. 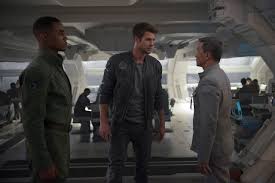 Just as you’re still trying to wrap your head around all the character development from the beginning (wait, who was that one guy? Why are we paying attention to him?), the moon base gets contact from something coming towards it.  Paranoid, and not listening to Levinson – they shoot it down, even though Whitmore and Levinson state it was not from the same species they are at war with.  Morrison uses his ship to pick up an item that was in the ship, and then go pick up Levinson.  As a huge ship shows up – large enough to have its own gravity.  It is zooming past Saturn, totally messing up its rings. It has a big time shield, so it destroys all the weapons we had in place both on the moon and around the earth.  During this rampant destruction – all kinds of obvious landmarks are destroyed, people get wiped out – and the president and other big-time execs are all wiped out – so suddenly General Adams (who seems to be in control at Area 51) becomes president. Hiller and his squad head down to earth. The ship – about the size of a continent – settles over the earth, and starts to drill, because of course – they want our core to power their ships. 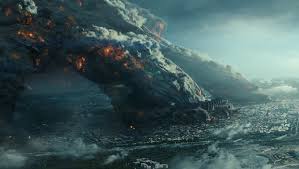 Everyone reconvenes at Area 51 and attempts to come up with a plan while Dr. Okun (who has been in a coma since the alien used him as a communication method in the first movie) wakes up and starts to go a little crazy.  None of the plans are particularly good, but basically they figure out that they won the first time when they destroyed the mothership, they killed the ‘Harvester Queen’.  Since these aliens are more insect-like, they figure that there is a queen in the mining ship clinging to earth, and if they can kill her – they can wipe out all the other aliens.  Great plan, but the queen realizes that the thing they got from the first ship that approached the moon is a sphere from another race, and she’s all about getting to that, so she comes after them. 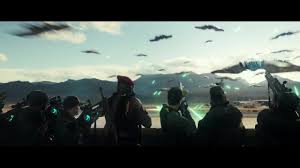 Okun gets the sphere loose, and Floyd accidentally opens it – and it starts telling everyone how it is a species that has evolved to really only be computers – and its running a ‘refugee planet’ for other species that have been displaced by these ‘harvesters’ wiping out their planets. The sphere is convinced it’s too late, once the queen gets a hold of it – all hope is lost. To prevent that, Morrison, Hiller and squad fly into her ship to try to destroy her, but of course; that was a trap – so they crash and have to steal some alien ships to fly out.  Levinson and Okun and all decide to replicate the signal the sphere makes and lure the queen out onto the salt flats so they can take her out.  A good enough plan, but the queen is surrounding herself with a swirling vortex of her ships – including Hiller and Morrison.  Eventually, they get her – rescuing the sphere, and cause all the other ships to crash.   Oh – and rescue David’s father Julius as he’s driving a school bus full of kids (worst forced storyline ever). The sphere then decides humans are pretty great after all and asks them to come help train all the other refugees so that they can wipe the Harvesters out of the galaxy.  Get ready for the next movie. 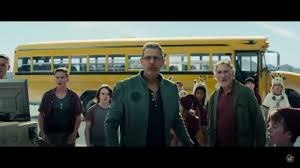 Like the first one, this is directed by master-of-disaster Roland Emmerich (Stargate, Universal Soldier, Godzilla, 2012, Day After Tomorrow), and produced by Dean Devlin.  It’s not nearly as strong as the first one, the setup is more choppy – and the new characters are not nearly as charming as the previous round.  It’s got potential – and it feels like it just comes up short of what I wanted, but does deliver here and there.

The movie looks great, but honestly, the worldwide CGI disaster has gotten so old at this point that my brain just checks out at those scenes “Oh, London is getting destroyed again”.  In the first movie, it was still new – now, we’ve seen it in almost every summer movie since then. When the destruction is so large scale and so animated, you really write it off, and don’t become invested.  It is clearly an attempt to top the first movie, but in doing that – it just ends up distancing the audience, whereas in the first movie, it pulled the audience in.  Honestly, I could have done with tighter action and less worldwide destruction. The story in the first movie also was strong and brought the audience in – here, it’s so overwhelming that it doesn’t really have the same intimacy the first one did.  The strongest part of the movie is once again the cast.  I personally missed Will Smith a whole bunch, I think the movie desperately needed his charisma – but hey, he was finishing up Concussion and starting Suicide Squad, so it didn’t really fit his schedule.  Did he make the right call? That remains to be seen (no, no he did not).  That charisma is lacking here, several of the new characters feel under-committed and tepid. What the original had going for it was that most of the actors were over-the-top enough to match the story/onscreen destruction. 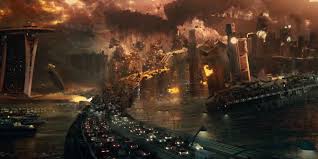 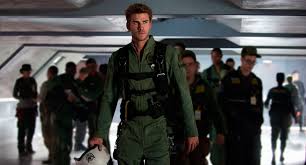 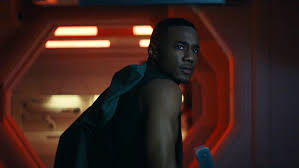 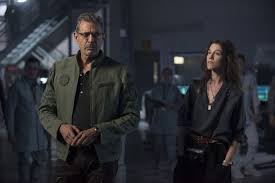 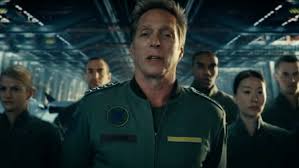 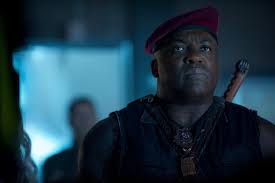 Now to the returning cast… 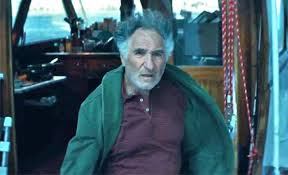 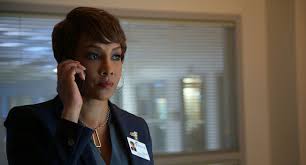 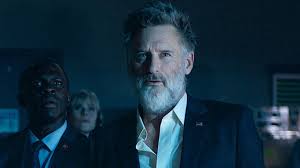 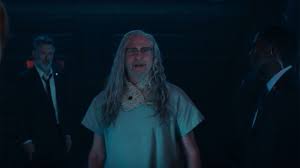 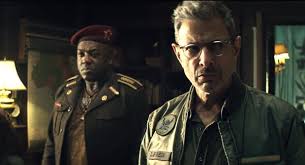 Overall, I’m honestly not sure what I thought about it. I simultaneously loved it and hated it.  There are parts that are great (most of them Jeff Goldblum), and parts that are terrible.  I was happy that there was some inclusion of hand to hand ground combat with the aliens, in the first movie – it was mostly aerial dogfights. The story wasn’t bad, and I’m interested to see what the sphere has in store for the future.  It could have been tightened up, cut out some of the useless parts and characters (Hemsworth, Hirsch, Fox, Wright and Gainsbourg could have all been removed) and strengthened some of the action – and actually made the action tighter, and I would have loved it.  Also –Will Smith – it really needed Will Smith.

6 out of 10 – not terrible, but not great.  We’ll see what comes next. I did like the alien queen, she was pretty nifty – but again, would have been even more impressive if she had not been ruined for me by the trailers. Get it together, Hollywood marketing people. 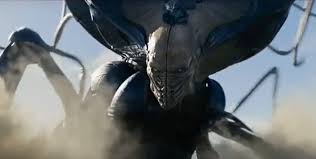