Inevitably, we were going to get to a movie this year that I hated – but I wasn’t expecting it to be this one.

The Circle is a movie based on the 2013 novel by Dave Eggers – who co-wrote the screenplay with director James Ponsoldt.  Honestly, I broke my own rule on this and went to see it despite having hated the only other movie by Ponsoldt I had seen, the Spectacular Now.  Since I believe movies to be the director’s medium, I try to keep in mind how I felt about a director’s previous movies when choosing whether to see their new movies.

I haven’t read the book, but in checking the synopsis on Wikipedia, I will say the movie seems to stick very close to the original plot.  It is centered around Mae Holland, a young woman stuck at a bit of a dead-end customer service tele-marketing type job who is very worried about her parents well-being, since her father has MS, in a fairly advanced state.  She unwinds by kayaking in the San Francisco Bay.  Mae’s friend Annie, meanwhile, is working at The Circle – a huge tech company that is inventing all sorts of operating systems and social media apps.  Annie gets Mae an interview, and she quickly accepts to join the Circle. 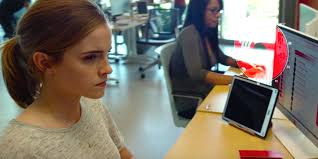 Once employed, Mae swiftly becomes enamored of the Circle’s fabulous campus, dorm-like living quarters, multiple activities, and super friendly (like creepy friendly) employees.  Mae is really beginning to enjoy all the aspects of her job – which is basically tele-marketing type customer service again – even after a weekend back at home lets her see that her dad’s disease is getting worse and her friend (her ex?) Mercer is warning her that the Circle is way to omni-present and folks need a little privacy. However, Mae is far too swept up in the ‘sharing is caring’ attitude of the company to pay any attention – even after meeting a handsome stranger at a company party – at which Beck is playing.  Beck.

At an announcement event by company head Eamon Bailey – Mae learns about the SeeChange, and new lightweight camera that transmits wirelessly and can be stuck to anything. Annie gets word to the Circle about Mae’s parents’ situation, and the Circle helps get them on her health insurance, and in exchange, they agree to have SeeChange cameras everywhere in their house.  After an evening of poor kayaking, where she almost drowns, but is saved by the fact that someone was watching on SeeChange cameras – Mae agrees to “go transparent”, letting SeeChange cameras watch her every single move as she goes about her day to day existence.  Annie, whose job is getting more and more stressful, gets a little jealous as Mae becomes the new poster-girl for the company, to the point that she is allowed in big-time board meetings and suggests technology ideas (what?).  Basically, she suggests the God’s Eye from the F&F franchise, or the thing that Lucius Fox and Batman created in Dark Knight.

At the next Friday announcement meeting, she and Eamon present this technology – which the world uses to find an escaped criminal in less than 15 minutes. At the crowd’s urging, they then use it to find Mercer, who has stopped talking to Mae – since she’s continuously plugged in.  They find him, and random people and drones are chasing him to the point that he accidentally drives his truck off a bridge while trying to get away. 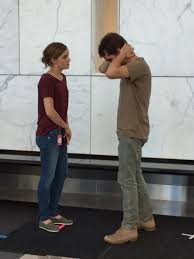 At this point, I expected the movie to turn the way it should have, Mae realizes how dangerous this ‘transparency’ is, and partners with the mysterious stranger who is popping up at the company and warning her to take them down from the inside.  However, she partners with him (it turns out he’s one of the guys who helped create the company by inventing its first system) to release Eamon and Tom Stelton’s (the number two guy in the company) private emails at the next Friday meeting, claiming they are not living transparently enough.  The movie then ends with her kayaking with drones – apparently completely bought in to the Circle and its goals of a total and complete lack of privacy for everyone anywhere. 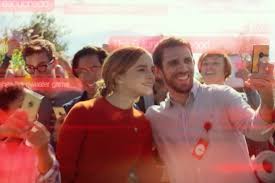 If that sounds odd to you, you’re right.  The movie is really choppy and uneven. The character development is really lacking.  Why does Annie have a complete flip in her personality? Why is Ty lurking around?  Why is Tom so serious about getting that politician on board?  And has Mae really drank the kool-aid that hard?  I really feel like there was an entire middle portion of the movie that I didn’t see.  I do feel like the majority of the cast is great, and the majority of the performances were good – or at least delivered on what they were asked to do.  I just think they were poorly assembled as a whole. 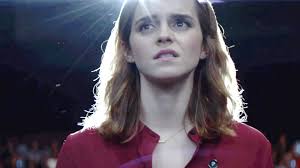 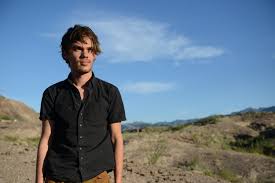 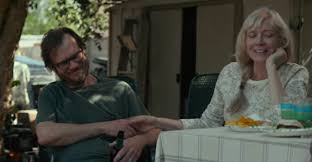 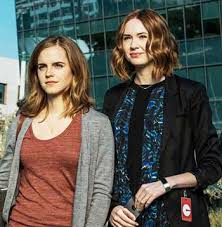 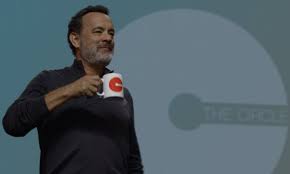 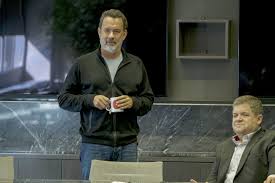 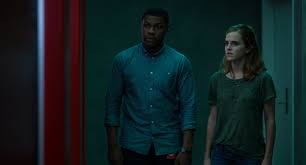 Overall, I really did not care for it – it just made no sense, and I can’t help but wonder that if the point was that Mae was so sucked in by the technology, if a different actress would have helped to convey that better. Perhaps if they had flipped Gillan and Watson?  I actually like the idea of having the movie end completely unexpectedly – with Mae completely surrendering to the ‘transparency’ of the Circle – but, I feel like Mae devolving from the ‘hero’ of the story to a ‘villain’ could have been executed a little better, and could have been really creepy if done properly.  Instead, I just felt annoyed.

3 out of 10 – lost points for not enough Boyega, and for the creepy-friendly employees, and for Silicon Valley doing a better job of a similar story weekly.

Email ThisBlogThis!Share to TwitterShare to FacebookShare to Pinterest
Labels: Circle: 3/10