Movie Review: How to Train Your Dragon, The Hidden World (PG - 104 minutes) 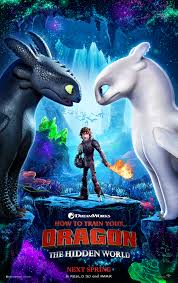 The first How to Train Your Dragon was released in 2010, and really struck a chord with me. I had not read the books, but really loved the movie.  It tells the story of Hiccup, a young Viking from Berk who is not at all like his father and their clan of dragon-hating Vikings (who all sound Scottish).  Hiccup is failing his dragon-killing courses, and accidentally stumbles across an injured Night Fury dragon while wandering one day.  While bonding with the dragon, who he names Toothless, he learns a great deal about them and starts to excel at his courses. He then uses that knowledge to get his people to change their way of thinking, and begin working with dragons.
In the second movie, the people of Berk have begun bonding with and riding the dragons.  Hiccup and Toothless are exploring and charting the world as Hiccup gets closer to his love Astrid and his father prepares to name him as successor.  He and Toothless accidentally discover a secret dragon ice cave, and battle a warlord looking to build a dragon army.  Hiccup loses his father, gets named chief, finds his mother, and defeats the warlord as Toothless becomes the Alpha of all the dragons in Berk.  Many a tear was shed at this movie as it is really heavy in most parts.

That catches you up and prepares you for the last movie in the series, The Hidden World.  Hiccup is doing his best to ‘rule’ Berk as Toothless keeps the dragons in line but the village is full of dragons and there is little to no room for anyone or anything.  This is complicated as Hiccup and his riders keep bringing back additional dragons anytime they rescue them from poachers, which is what they spend most of their time doing. 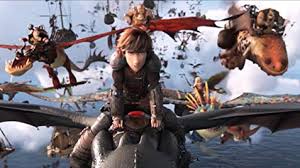 A new enemy, Grimmel, arrives on the scene, famous for having killed all the other Night Furies in existence.  His sights set on Toothless, he does some threatening and posturing, enough to make Hiccup think it’s time to set off and find the ‘Hidden World’, a place where the people of Berk can live with their dragons, free from being hunted by anyone else.  Grimmel sets loose a Light Fury, a female dragon that completely distracts Toothless, and lets him get an advantage in hunting down the people and dragons of Berk.  Hiccup and Astrid begin to realize that perhaps they were not meant to live with dragons, and everyone would be safer if they said good-bye. 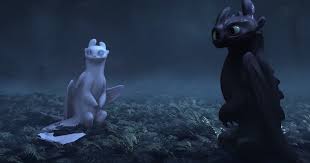 That sounds like a spoiler, but it isn’t – all the trailers have been stating that is what is happening in this movie. I went in prepared with a box of tissues next to my popcorn, considering how much the last one made me cry. I will say – it’s not nearly as heavy as the second.  It is touching, and moving, but it has a really happy ending.  Director Dean De Blois continues the amazing visuals in this movie from the others in the series, and it is just absolutely stunning. The world is lush and gorgeous, and the flight scenes make you wish you had your own dragon.  I really appreciated the scenes of just Toothless and his lady friend. I am always impressed with how expressive Toothless is (he looks like my cat, which is part of why I spent so much time crying at the last movie), and the scenes without any humans were lovely, because the communication between the dragons was so clearly expressed.  Toothless and the Light Fury are so enchanting, I felt like I didn’t really need any of the other characters! 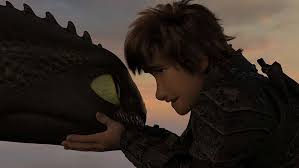 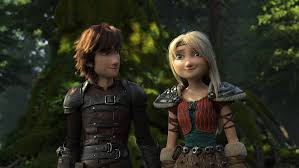 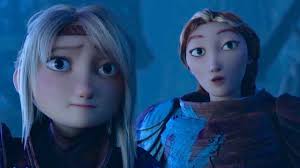 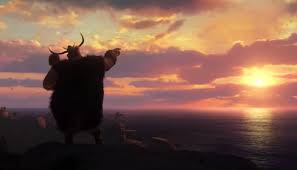 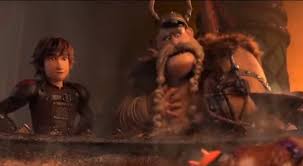 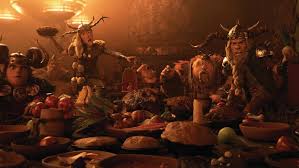 The movie is exceptional, beautiful, touching, and fun. It’s the perfect ending to this wonderful trilogy.  Side note, I saw this opening weekend. In the row behind me, a woman had brought four young children, all seeming to be under the age of 4. None of them watched any of the movie, preferring to yell and scream at one another the whole time.  Listen, yes, it’s a kids movie, but it is a little more complicated than most with a great deal of fairly complex storytelling.  Maybe don’t take the really young ones to this one – if not for their sake, for the sake of everyone else in the theater.

Email ThisBlogThis!Share to TwitterShare to FacebookShare to Pinterest
Labels: How To Train Your Dragon 3: 9/10