Movies that take place on a spaceship while an alien lifeform wipes through the cast one at a time all owe a debt to Alien. It might not be the first that did it, but it sure did it the best.  And that’s both the blessing and curse, nothing else can really come close to that movie, despite how hard they try. 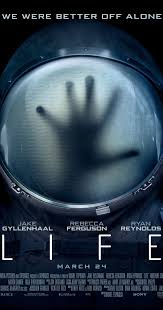 In Life, the crew (Sho Murakami, Rory Adams, Miranda North, David Jordan, Ekaterina Golovkina, and Hugh Derry) of the International Space Station is ready to receive an unmanned vessel is returning from a trip to Mars with some important samples when it is hit by some random meteorites. With the vessel damaged, the crew sends out Rory to use the arm of the station to catch it.

They immediately start to work on the samples.  Imagine their surprise when scientist Hugh finds a single-cell organism in some of the rock/dust samples. It bears some resemblance to earth-based protozoa and he feeds it some glucose.  Sure enough, the organism starts getting bigger and since every cell of it does everything, essentially, it’s all eye, all brain, and all muscle.  The crew is entranced because as it gets bigger it grows little wing-like appendages and starts creepily caressing Hugh’s finger.  The ISS is in constant communication with earth, so some elementary school kids who won a contest get to name the alien, and name it after their school, Calvin. Well, since no one in the crew has ever seen a movie, Hugh continues to feed and experiment with Calvin.  After he goes non-responsive when his tank accidentally loses air, Hugh decides to poke him with an electrical rod. Calvin doesn’t like that, promptly grabs Hugh, crushes his hand to a bloody pulp, then figures out how to grab a sharp thing to cut the glove and squish himself through a tiny hole. 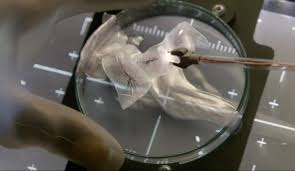 Since he’s trapped in the lab with an unconscious Hugh, he goes after the resident lab rat, and crushes/consumes it – getting even bigger. Rory decides to go in after Hugh – he gets Hugh out, but gets stuck in there with Calvin.  He attempts to burn Calvin, who dodges him by whipping around the lab like one of those sticky octopus toys you used to throw at the wall.  Sure enough, Calvin flips the script and goes inside Rory, to consume more and get bigger.

Calvin, now looking mostly like a squishy malevolent space butterfly, starts looking for an exit.  He tries getting out the air vents of the room, which the crew can only shut one at a time, because, drama. Calvin is just too fast for drama, and gets out of the last one prior to it being shut. The crew figures out that he seems to be looking for water/oxygen/coolant to consume.  They try to send a distress signal, but communications are down, so Ekaterina decides to go outside to correct the issue.  When she gets outside to fix the communications, for some reason she has to open a tube, and sure enough – Calvin explodes out of it, sticky-grapping her suit to get at her coolant.  Rupturing her coolant causes her suit to flood from the inside. She makes it back to the hatch, but refuses to let Calvin in, so David gets to watch her die.

Calvin still has four crew members to kill and starts trying to get in through the thrusters. Sho figures out how to prevent this, but then Miranda reminds everyone that they are the last line of defense, and they absolutely cannot let Calvin get to earth, so they agree to let him back in the station.  They come up with a plan to get him trapped in a room, suck the air out, and suffocate him.  A solid plan, but he evades them by hiding on Hugh’s leg (Hugh’s paralyzed, so he can’t feel his legs) to sneak into a room with them.  Sho gets separated from Miranda and Dave, who try to convince Calvin to get off Hugh’s now dead body – but he’s even bigger now and more flappy and less sticky.

Sho (who of course just had a baby (this movie uses all the stereotypical character tropes it can find) is hiding in sleeping quarters and Miranda and Dave are in with the computers.  They can see Sho on the computer layout of the station – as well as Calvin – who seems to have sucked Hugh’s locator out of his leg. Gross and convenient.  In any case, suddenly a rescue pod shows up from the surface. However, Miranda tells Dave they are not rescue. They received part of the distress signal, and since they are the final line of defense (this is mentioned several times), the pod is just going to push the station out of orbit into deep space. Sho doesn’t know that, and heads towards the pod to get rescued, right through the room that Calvin is hanging out in with Hugh’s body.  Calvin goes with Sho to the pod and makes quick work of the two in the pod and Sho.

With only Dave and Miranda left, and oxygen running out through the station, everyone is starting to need some air. Dave and Miranda come up with a plan to use the two lifeboats. Dave will lure Calvin with him using Oxygen torches, which are these neat little tube deals that give off oxygen, and Miranda will take the other one to earth.  This all goes pretty well, since Calvin is all about hugging the torches.

He even looks pretty cute while doing that with his sticky, flappy wings and artichoke-like face/head.  Dave gets him in the pod and they head off into deep space, while Miranda makes it to the other lifeboat/pod, swiftly recording a message to let everyone know what they found is dangerous, in case she doesn’t survive reentry.  The station is breaking up as they are pushing off, and the two pods cross back and forth several times.

Spoiler alert here – but of course, you can tell what’s going to happen.

The next shot is a pod landing on earth in water near a fishing boat, and two fishermen motor up to it, looking into the window, they see Dave wrapped up in Calvin’s loving embrace Dave screams for them to not open the door – they sure do open the door – and we see Miranda in her pod screaming as she realizes she is heading into deep space.

It’s a twist you see coming, but is still well done.  Director Daniel Espinosa also did Safe House, and has a gift for tense claustrophobic action pieces.  The tension builds as the movie progresses, and the scenes of them attempting to find Calvin on the station as he hides from them are pretty great.  The design of the station was also wonderful, and really added to the tight enclosed nature of the movie.  The opening single shot following the crew members from room to room is really interesting.  They have to be weightless for the whole movie, and is believable for the most part.  The look of Calvin is interesting as well. I will say that we did not need the Calvin POV shots - he seems to see as if he is underwater, and that was distracting rather than engaging. Overall, the movie is serviceable, the story standard, and the cast decent. 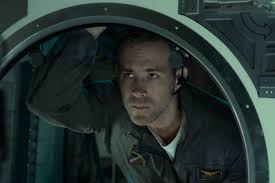 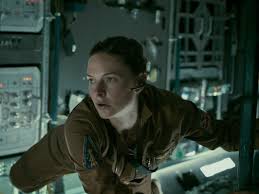 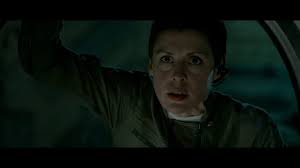 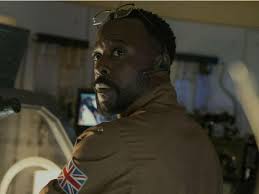 Overall, the movie is just fine. It’s not great, but it’s not terrible. It’s an interesting story that you’ve seen a couple of times before.  I did read somewhere online that the showrunners were not denying that it could be seen as a prequel to a Venom-style symbiote movie.  Very interesting, and in that case, wouldn’t Gyllenhaal be playing John Jonah Jameson Jr.?  Well, maybe not, but I certainly enjoyed that angle.

6 out of 10 - Gained points for the possible Venom connection, and for Calvin cuddling the oxygen torches – adorable.

Posted by Jeanette Ward at 3:25 PM

Email ThisBlogThis!Share to TwitterShare to FacebookShare to Pinterest
Labels: Life: 6/10