Jumanji was originally a creepy story written and illustrated by Chris Van Allsburg and released in 1981.  Essentially two kids find a board game, take it home, and start playing.  The game starts brining dangerous jungle things into their house, and the danger will not stop until they finish playing. 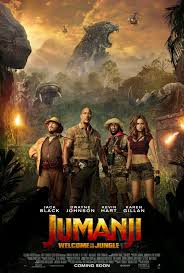 This story was adapted to a movie in 1995 directed by Joe Johnston and starring Robin Williams and Bonnie Hunt, where they started playing when they were little – but as soon as Alan got sucked into the game, Sarah ran off, not finishing the game, and leaving Alan trapped inside of it.  Many years later, Judy and Peter begin playing the game and are shocked when an adult Alan pops out of it – having lived the last 20 or 30 years inside the jungle game.  They finish the game, and it returns everyone to not only where they came from but when they came from – giving Alan the opportunity to live his life.

In this update/reboot/sequel, a man finds the game while jogging and takes it home to his son, Alex, in 1996.  Not interested in board games, Alex tosses it aside to play his video games.  Jumani – in what I can only assume is a fit of rage from being tossed aside – transforms into a video game.  Alex picks it up the next morning to play it, and is sucked into the video game.

Years later, in 2017, four high school kids have breakfast-clubbed their way into detention and while cleaning out the basement, find the Jumanji video game in a box labeled “donations”.   Fridge is the football star, Spencer is the smart nerd, Bethany is the self-absorbed pretty girl, and Martha is the smart, driven student. To pass the time, they pick up the video game and begin to play – each choosing an avatar, but noticing there is one that cannot be chosen – indicating it is already in play.  They get sucked into the game, and take the form of the avatars they chose. 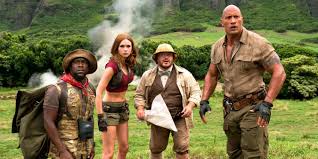 Fridge becomes the zoologist Franklin Finbar, Spencer becomes Dr. Smolder Bravestone, Martha becomes Ruby Roundhouse, and Bethany becomes Professor Sheldon Oberon.  They quickly realize what happened, that they each have three lives, and that they each have special skills.
Working out the goals of the game, they learn how to use their skills and their teamwork to get a jewel back from the evil Russel Van Pelt and return it to the ‘jaguar’s eye’ in the center of the game.  Along the way, they meet up with the fifth player – Seaplane McDonough who is Alex, and has been in the game for 20 years, living in a shelter originally built by Alan Parrish (Robin Williams’s character) when he was trapped in the game.  Eventually (spoiler alert), they return the jewel, and free themselves – returning Alex to when he was taken.  They each learn to be a little bit better of a person after their adventures. 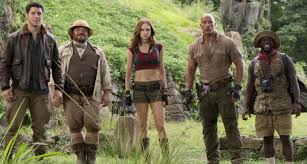 This version is directed by Jake Kasdan, who is known for more comedies (Orange County, Bad Teacher, Walk Hard, Sex Tape).  It is certainly very funny in parts, and shooting in Hawaii makes it look phenomenal.  I will say that since it has a very ‘Uncharted’ type – vibe, video-game-wise, I felt that it missed some opportunities with the game aspect.  It could have had all the AI characters less colorful, with only the items and the people you are allowed to interact with in full color – something that is used in many games.  There were a few other items like that where they could have really upped the gaming aspect of the movie – but it certainly doesn’t suffer from not doing that.  The point of the movie is the interaction between the cast. 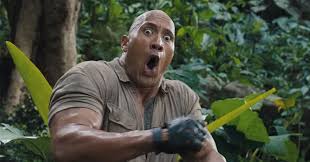 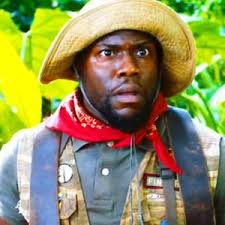 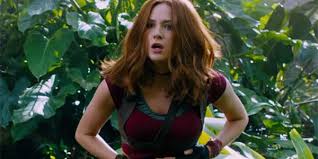 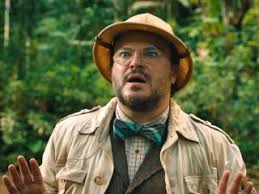 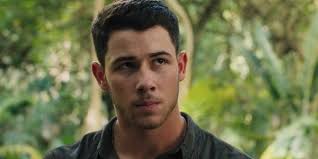 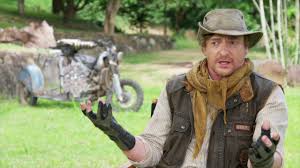 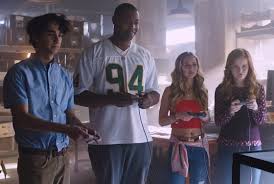 Overall the movie is charming, fun, and action packed.  The cast looks like they are having a blast playing these roles, and that really does help make the movie more entertaining. There are a lot of really funny scenes – and those are mostly with cast talking to one another.  This is definitely at movie that would have benefitted from outtakes over the end credits.  Here’s hoping the BluRay is filled with those! 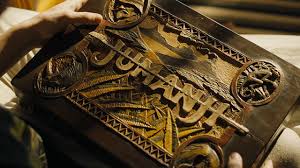 Posted by Jeanette Ward at 9:24 AM

Email ThisBlogThis!Share to TwitterShare to FacebookShare to Pinterest
Labels: Jumanji Welcome To The Jungle: 7/10