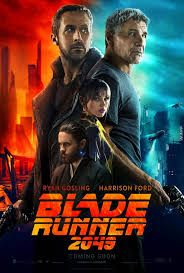 Ridley Scott’s Blade Runner, a movie based on the Philip K. Dick novel “Do Androids Dream Of Electric Sheep?” was released in 1982.  It was long, dark, slow, dystopian, and considered by many to be epic.  Scott, not happy with the first cut, released a director’s cut, and then there was another cut released after that – and possibly several others.  I’ve seen it, but never all the way through in one sitting.  The story is set in 2019 and revolves around former police officer Rick Deckard, a ‘Blade Runner’, who tracks down and ‘retires’ (kills) escaped bioengineered beings called replicants.  They’re not quite robots, and a step above androids, and some of them think they are human on account of implanted memories. While Deckard hunts down and works to eliminate Roy the replicant and others, he falls for a replicant from the Tyrell corporation named Rachel. He and Rachel end the movie together, even though as a replicant, she will have a shortened life span.

The follow-up, set in 2049, follows replicant Blade Runner K who is a newer, more obedient model.  He doesn’t even mind when his co-workers call him a ‘skin job’.  He’s doing just fine with his job, his tough-as-nails boss, his tiny apartment and his holographic girlfriend.  He is hunting down and retiring older model replicants, which leads him to investigate a growing replicant freedom movement.  K encounters Sapper Morton (an old Nexus Model 8 replicant) on a farm, Sapper is disappointed a replicant is hunting other replicants, and claims that it is because K has “never seen a miracle.” K retires Sapper, and learns there is a box buried in the yard, sends word to his boss, who sends back a digging team.  They find bones in the box, and learn they are from a woman who died in childbirth, but is also a replicant, which should not be possible.

We’re also introduced to Niander Wallace, who has gotten the Tyrell Corporation back up and running with the new, more obedient, replicants.  He’s disappointed that he can’t make them reproduce, because he’s all about a slave race of manual laborers. He’s so disappointed he slashes a new one through the abdomen despite being blind. I really did not understand the point of this sequence other than just to prove this guy is the heavy. He sends his assistant, Luv (a replicant) to track down K and the ‘child’ that K is searching for.  Meanwhile, K is starting to lose control of his emotions, failing a base line test, going on the run, and following the lead he gets from a tiny wooden horse to an orphanage, to a memory builder, and back.

Eventually, while being pursued by Luv and her crew, K heads out to the remains of future Las Vegas, to find Deckard, who is now living basically in exile with what may or may not be a real dog.  K has figured out that the child was the product of Deckard and Rachel, and is now looking to find the child, having been commanded to ‘retire’ it.  Luv needs to take it back to Wallace so that he can dissect and analyze it to make all his other replicants capable of reproducing. K and Deckard have a fist fight through the remains of a casino which includes flickering Elvis holograms. Deckard is less than helpful, since he does not know where the child is, but that doesn’t stop Luv from overpowering K and snatching Deckard so K has to rescue him and attempt to get control of his slowly deteriorating calm demeanor.

I won’t say much else, because there is a bit of twisty-turny surprise/non-surprise stuff that happens, and if you’re going to see it, it’s worth not knowing what is coming next.  I’m not sure I was surprised, but I was interested. Directed by Denis Villeneuve, the movie has an ugly beauty to it, similar to Villeneuve’s Arrival.  The city is harsh and ugly, but the shots moving through it are wonderful.  The scenes out in the desert are equally hauntingly beautiful. The score is very interesting – at times crazy loud and booming, and in other places, quiet and creepy.  In terms of the performances, everyone does a really good job with some interesting characters: 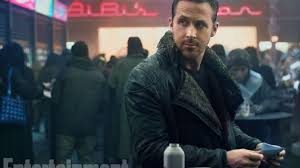 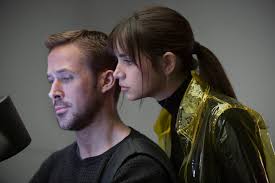 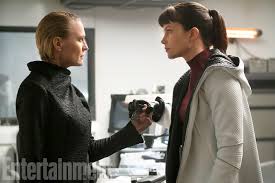 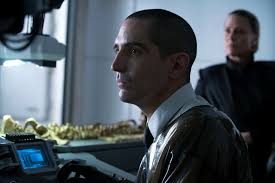 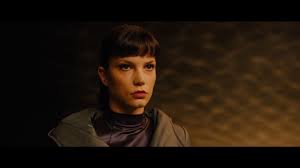 Overall, I enjoyed the movie, but I didn’t love the movie.  It is way too long.  It really could have benefited from being edited.  Yes, it looks amazing, and I was impressed by the story and the performances.  The settings, landscapes, and locations were amazing, as well as the costumes, makeup, and effects.  Keep this one in mind for all the technical categories for your office Oscar pool. 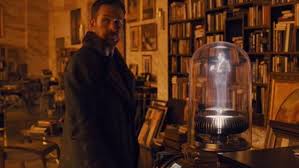 7 out of 10 – Visually stunning with an interesting story, but way too long, a bit draggy in parts, and while the characters were interesting, I wasn't overly invested in any of them.