The MCU – or Marvel Cinematic Universe – started in 2008 with the release of Jon Favreau’s Iron Man and the re-re-invention of Robert Downey Jr.  It was carefully crafted to begin a series of films featuring Marvel characters, and create a wide-ranging universe that would allow these characters to interplay with each other in their own films and come together in group efforts.  Phase 1 included Iron Man (2008), Incredible Hulk (2008), Iron Man 2 (2010), Thor (2011), Captain America (2011), and built towards Joss Whedon’s The Avengers in 2012 which managed to bring all the characters together in a really fun way.

Phase 2 continued with Iron Man 3 (2013), Thor 2 (2013), Captain America 2 (2014), Guardians of the Galaxy (2014), Avengers 2 (2015), and Ant-Man (2015).  The second Avengers again featured many of the heroes working together, but I found myself enjoying several of the more individual movies a little bit more.  In particular Guardians of the Galaxy introduced characters I was mostly unfamiliar with, but was done with so much fun and general space badassery by director James Gunn that it swiftly became one of my favorites.  I also really loved Ant-Man, which was a super fun tight little heist movie by Peyton Reed.  Captain America 2 – the Winter Soldier – was directed by the Russo brothers, who started on episodes of Arrested Development and Community, and really announced themselves as terrific action directors.  The movie felt like a 70s espionage movie, introduced Falcon, strengthened Black Widow, and brought back Bucky Barnes as the vicious Winter Soldier.  It was an incredible movie that is still one of my favorites.

MCU Phase 3 kicks off with Captain America Civil War, which features so many characters it’s almost Avengers 3.  However, it tells a more personal story, it just happens to have a ton of people in it.  In the comics, the Civil War storyline took place from 2006 – 2007. 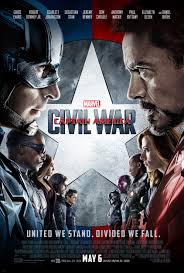 Essentially, the government passes a Superhero Registration Act, designed to have super-powered individuals act under official regulation, like a higher level police unit.  Superheroes opposed to the act (Cap and team) find themselves taking a stance against those who support it (Iron Man and team).  The X-Men remained neutral – having dealt with a lot of anti-mutant sentiment already, and Mr. Fantastic and Ms. Marvel join Iron Man in support of the government.  The pro-registration team becomes more authoritarian, and in the aftermath, Captain America surrenders and is imprisoned.   There are lots of other things that happen – but that’s a quick summary for you – this movie uses some themes from the comics, but the main storyline is different. 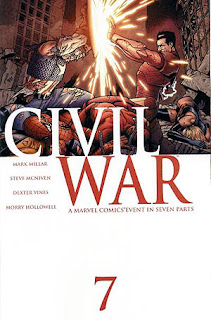 This is definitely a Captain America movie, and picks up with Cap leading his group of new Avengers from the end of Age of Ultron on a mission to find and stop Crossbones, who is what’s left of Brock Rumlow.  You remember him – he was the leader of the strike force in Winter Soldier who betrayed Cap and was revealed to have been Hydra the whole time.  Well, he’s leading a ragtag group of mercenaries on what seems to be random terrible missions.  He and the other mercenaries are trying to steal a biological weapon from a disease center in Lagos, Nigeria when Cap, Falcon, Black Widow, and Scarlet Witch team up to stop them in an absolutely incredible action sequence.  They are pretty much successful, except for the fact that Crossbones attempts to win by blowing up himself and Cap – but Scarlet Witch contains the explosion, and sends it upwards – right into the side of a building, resulting in the deaths of several people – including eleven citizens of the very wealthy, very technologically advanced, very private, and very fictional Wakanda, who were on a peace mission. 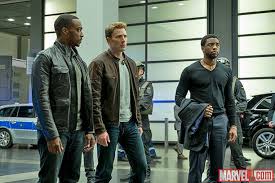 Back at the Avengers compound, Scarlet Witch is wallowing in her guilt over the situation when the Secretary of Defense, Thunderbolt Ross (who we haven’t seen since the Incredible Hulk in 2008), comes by to tell them about the Sokovia Accords.  Everyone gathers at the Avengers Compound Official Conference Table.

Essentially, the UN is tired of the collateral damage of the Avengers fighting evil, and wants something in place to hold them accountable.  The heroes who sign the accords will report to the UN, going only where they are sent, and taking action only when they are allowed.  Cap’s not sure that’s the best bet, he knows that even though the Avengers can make mistakes, they are still better off operating on their own.  As everyone is arguing, and Vision is quoting math and logic, Cap gets a text that Agent Carter has passed away.

He heads to London for the funeral, where he’s reintroduced to Sharon Carter – Agent 13 who lived across the hall from him in Winter soldier.  Everyone else heads to Vienna to sign the accords, where Black Widow gets to chatting with T’Challa, the prince of Wakanda, there to support his father T’Chaka as he pushes for the signing of the accords.  While there, a bomb is set off, T’Chaka is killed and the Winter Soldier is the main suspect. T’Challa sets off with vengeance on his mind, and Sharon gets word to Cap that Bucky has been spotted in Romania - probably because Sebastian Stan was born in Romania and speaks it fluently.  This leads to the amazing Bucky/Black Panther/Cap/Falcon chase/fight that you’ve seen clips of, and yet – it’s still a downright amazing action sequence.

Inevitably, everybody gets captured, Cap gets chastised by Tony Stark, who is pushing hard for everyone to sign the accords thanks to his guilt over the amount of people killed in Sokovia while fighting Ultron (his fault). Black Panther is still all about killing Bucky, Falcon is about backing up Cap, and Cap is about trying to help Bucky, believing him when he said he didn’t do the bombing.  Here, the main villain’s plot starts to really come together, and Bucky gets out, leading to the escape action sequence.

That leads to both sides calling in assistance wherever they can find it for the airport action sequence.  Cap’s team is there to basically distract as Cap and Bucky get to a plane to get to Russia, and Iron Man and his team are there to arrest Cap and team.  Listen, by now, you’ve heard about the sequence, and I will confirm that it is easily the best fight sequence in any superhero movie to date – but above that, it’s an exceptionally fun fight sequence in any movie.  The weight of the emotional aspects of the story never gets lost, but there are enough jokes and fun spots sprinkled in that the entire scene is entertaining and spectacular.

I won’t say much else, because really you do need to see this movie.  The Russo Brothers have outdone themselves with this one, and really, the best news to come out of this was that they have been confirmed as the directors of the next two Avengers movies in late 2018, and 2019. It is so much fun, the action is incredible and the performances are wonderful.  Spoiler Alert from this point down.  You’ve been warned! 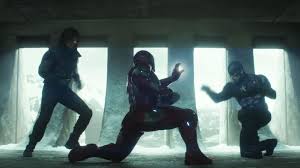 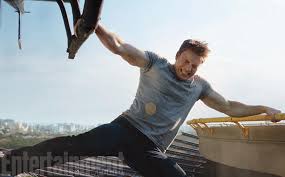 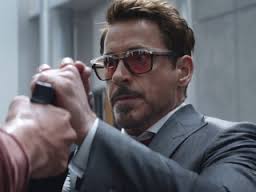 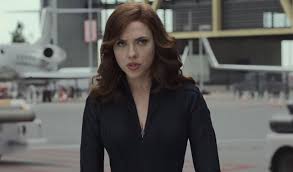 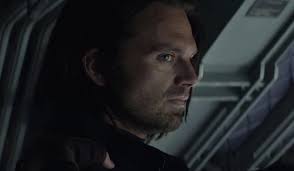 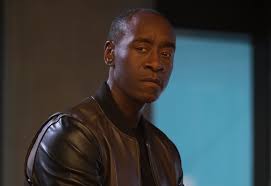 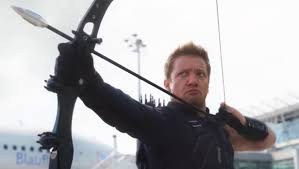 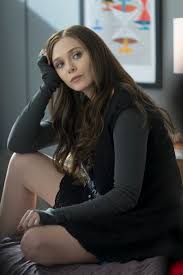 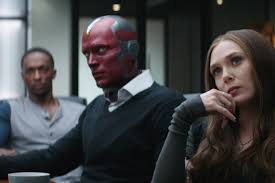 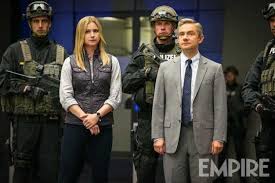 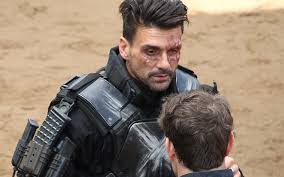 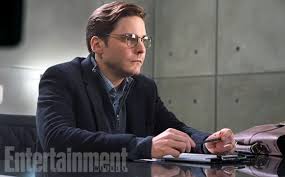 Now to the three guys who stole the movie in various ways. 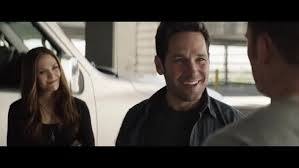 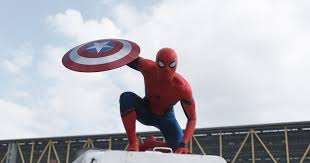 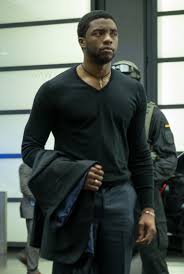 In reality, there is no comparison to the other ‘comic’ movie that came out earlier this year, Batman vs. Superman. They are completely different movies from completely different franchises, and each achieves their own goals.  However, comparisons are going to be inevitable. I loved this one, and I hated the majority of BvS. That movie was so completely joyless, with only two humorous lines in the entire movie. The fight between the two leads in BvS felt forced, and made almost no sense, because really, they both should have figured out they were being manipulated into hating one another by Lex. Also – Batman should not be manipulated, by anyone. Ever.

By contrast, this movie, while dealing with fairly heavy subject matter, never once sells that subject matter short, but never once falls into ‘joyless’.  It remains fun, entertaining, and exceptionally watchable.  It’s really long, but moves fast almost the entire time. By contrast to the fight sequence in BvS, which felt forced and was very short – the airport fight sequence in this movie makes sense, and again is one of the best action sequences ever.  When the two factions face off, it is easy to believe that these two groups don’t really want to hurt one another - both believe their side is the right side – but they are all still friends. Marvel continues to cast the right people in the right roles – ensuring that each new player fits into the larger universe, gets along with everyone else, and is ready to help make the greater universe better in whatever way possible.  This was more than evident when watching the Civil War red carpet footage – everyone from all Marvel properties were there, from this movie, from other movies, from the TV Shows, and from the Netflix Shows.  Marvel has taken great care to craft this universe and deliver quality stories within it.


Dr. Strange comes out this fall, and while that’s a character I never really felt a great attachment to, or had a great interest it, I am excited for the movie – because Marvel has proven themselves time and time again.

11 out of 10 - tempted to give it a 12. Yes, that is how my numbers work. I loved it top to bottom.  Yes, it was long, and yes, there are a few tiny issues here and there – but honestly, there’s so much good in it, it completely overwhelms the small issues. I can’t wait to go see it again.

Bonus - The Russo Brothers being awesome:

Only You, so charming.

Posted by Jeanette Ward at 1:01 PM