I found something on the internet the other day about a possible remake of Starship Troopers.  That very idea is ludicrous, as Verhoven’s original is near-perfect (except for Denise Richards, of course), and secondly, because it was super cheesy and fun (with some interesting thought behind it – would you like to know more?) – and it seems that all the recent remakes of super fun, cheesy, slightly thoughtful older movies have removed all the fun, and therefore are way less successful (see the RoboCop remake, the Total Recall remake, the Conan remake… or better yet, don’t see them.  Just re-watch the originals). Also – it’s based on the book “All You Need Is Kill” by Hiroshi Sakurazaka, first published in 2004.  It is about a young soldier, Keiji Kiriya, a new recruit in the United Defense Force.  They are fighting against the mysterious ‘Mimics”, which have attacked earth.  Keiji is killed, but then wakes up the day before, and gets caught in a time loop – living the same day over and over as he becomes a better soldier to try to change his fate. 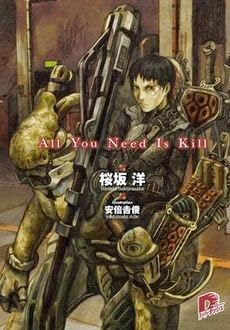 Sometime in the near future, there’s a meteor crash in Germany.  Except, it’s not a meteor, it’s the beginning of an alien invasion.  From the meteor is released a swarm of “Mimics”.  They seem to be flailing, tentacle-laden, rolling whip monsters.  The Mimics start to spread across Europe.  This part of the story is told very quickly through news reports on TV screens and we are introduced to Major William Cage, who is essentially a military PR guy.  He’s there to make you feel better about our chances and look good giving interviews on TV.  He goes to visit the General in command in London, and the General decides to drop Cage in on the front line.  Cage protests, and the General has him arrested and knocked out.  He wakes up dumped on the base, where he is quickly introduced into his squad (J-squad, the typical military movie ‘loser’ squad filled with all the military movie stereotypes you could ask for.  He gets thrown into an exo-suit (essentially a robotic exo-skeleton that makes you stronger and has weapons in it) with little to no direction and dropped onto the beach of France (read your own WWII inferences here if you like) and promptly witnesses the majority of his squad killed very quickly.  He grabs a grenade as a Mimic comes close – a bigger, bluer Mimic than the rest.  The grenade takes out him and the Mimic, and as he dies, he gets a whole bunch of Mimic blood on him.  He then wakes up dumped on the base again – where once again he is introduced to his squad – and so on.

This repeats over and over again as he learns more about the weapons and remembers the sequence of events on the beach – so he progresses a little bit further each time, but he still keeps getting killed on the beach.  Eventually he runs into Rita Vretaski, the ‘angel of Verdun’.  She’s the hero of the last major battle that the humans won.  He is able to save her from a couple of Mimics, because he’s done it about 12 times at this point already – and she mysteriously tells him to come find her when he wakes up.  The next time, he goes to find her, and she recognizes what is happening to him, because it happened to her at the battle of Verdun.  However, once she was injured and taken to a hospital, they gave her a blood transfusion, and she lost the Mimics ability to jump back a day.  Despite that, she was able to learn that in order to win, the humans have to find the Omega because of her visions (don’t ask).  The Omega is the source of the Mimics…power?  Their home base?  Their ship?  Their big, glowy ball of energy that they keep underwater?  I’m not entirely sure.  It’s not really explained, and it doesn’t really need to be.  The Mimics brought it with them.  If Rita and Cage can destroy it – chances are they will win the war.

Director Doug Liman has done his fair share of cool action flicks (Jumper, Mr. and Mrs. Smith, and The Bourne Identity).  This movie is cool – the action is great, and the story is interesting.  My issue is mainly with the Mimics themselves.  I felt like I never really got a good look at them.   I found myself thinking of the bugs in Starship Troopers, (or the Aliens in Aliens) and the care taken with them, and how much of a great look we got at them, and how believable they were.  The truth is, the Mimics move so fast and seem so completely unbeatable, I found myself mentally checking out whenever they were on screen, and fondly thinking of the practical/CGI effects that made those other enemies look so good.  This movie would have benefitted from some practical aliens.  You never really get a sense of what exactly the Mimics look like.  There are a couple of shots where you get a look at the “Alpha” Mimics (the bigger, bluer ones), but the smaller ones look like rolling whip-balls. 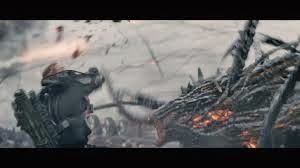 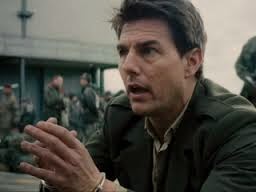 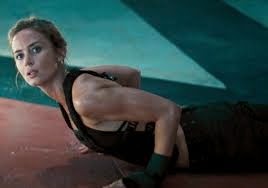 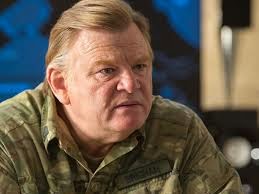 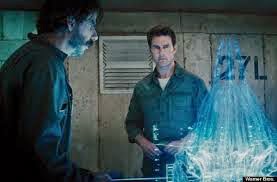 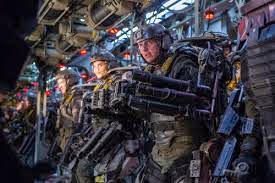 Overall, the movie was certainly entertaining, but in a summer where a lot of things have been great, it falls a little flat.  Cruise is insanely watchable, Blunt is a pleasant action surprise, and everyone else in the movie is capable.  The story is interesting, and there are plenty of humorous moments mixed in the “resetting” that Cage has to do. It’s exactly what you want from a summer popcorn flick – I don’t think you need the 3D. 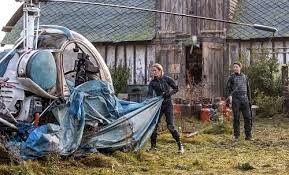 7 out of 10 – Gained points for Emily Blunt being a bit kick-ass, Lost points for not really giving us a good look at the aliens.  Gained points for the interesting exo-suits as military hardware – Lost points for having only one scientist in the whole movie who is analyzing the aliens, and he got booted down to janitorial duties for his efforts – where are all the military scientists analyzing the enemy to find the weakness?  Come on, guys – that’s alien fighting 101.
Bonus Video 1:  Paxton is pretty spectacular in True Lies, which is a super fun movie if you forgot or hadn’t seen it in a while.

Bonus Video 2:  Doug Liman has done some great movies – but Mr. and Mrs. Smith is my favorite.  This is what ‘chemistry’ looks like.
Bonus Video 3:  The SDCC 2013 Edge of Tomorrow Panel

Email ThisBlogThis!Share to TwitterShare to FacebookShare to Pinterest
Labels: Edge of Tomorrow: 7/10