The book, A Wrinkle in Time, was write by Madeleine L’Engle, and was first published in 1962.  I remember reading it when I was in middle school, but honestly, I don’t remember much about the story, other than it was a little confusing.  It was adapted for a made for TV movie in 2003, which L'Engle was displeased with as it removed her overtones about Christianity. 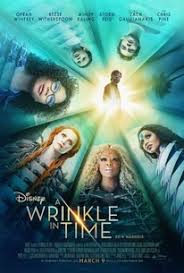 This version is directed by Ava DuVernay.  The story starts with young Meg, studying with her scientist father as he explains various frequencies.  Mr. and Mrs. Murray are both scientists, and are studying…well, I’m not entirely sure what they are studying. Frequencies, space-time, folds, the ability to travel light years in seconds using your mind, etc.  Mr. Murray is talking with Meg, and talking to her about the arrival of her new baby brother, who is about to be adopted. We flash forward several years, to the fourth anniversary of the disappearance of Mr. Murray.
Meg is now struggling in school, and her younger brother, Charles Wallace, is extraordinarily intelligent, so he’s being bullied.  And because Meg is now sad and withdrawn, she’s being bullied – so it’s just bad for everyone.  Apparently Mr. Murray vanished after he and his wife gave a talk at a science symposium of some sort, and he went a little off-topic insisting that traveling through these ‘space-time wrinkles’ or ‘tesseracts’ was possible.  Immediately thereafter, he successfully ‘tessered’ and disappeared.  Four years later, Charles Wallace has been talking with Mrs. Who, Mrs. Whatsit, and Mrs. Which.  The Mrs.s are three celestial being who have heard a call for help across the universe, and come to Charles Wallace, Meg, and her random friend Calvin, to come assist find their father, who they believe made the call.

This leads to a cross-universe adventure during which the children successfully tesser with the Mrs.s to several planets, and finally find out that their father is on Camazotz, which is the center/home base of all darkness in the universe.  Meg has to battle her own lack of confidence to save her father and bring light back to the universe.
Ava DuVernay has done an incredible job with the look of this movie. It is stunning and luminous.  The story is a little confusing, but I think that has more to do with adapting a confusing book than with the movie itself.  Apparently she chose to remove some major pieces of the book, including Meg's other siblings, and the Christian tones.  I did want a little more explanation of the details and the science to what was happening - incidentally, the trailer above has a whole explanation that was not in the final movie! How exactly do you 'tesser'? Why is Meg looking like she is drowning in white sheets in the beginning, but by the end is surrounded by lustrous CGI ribbons? Again, it’s a kids story/book so that’s not as important. Along with the visuals, the costumes on the three Mrs.s are fantastic.  They are outrageous and beautiful, and change with just about every scene. The casting is divine, everyone is perfect for their roles. 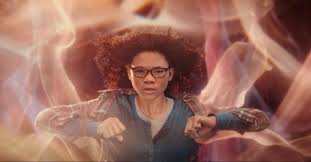 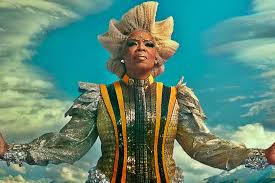 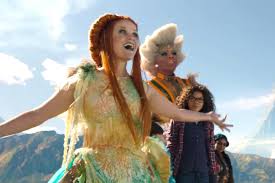 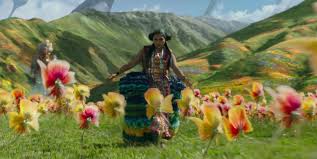 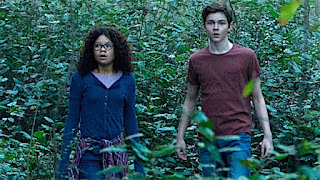 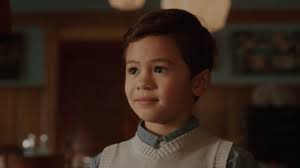 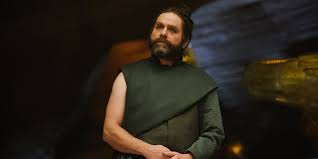 Overall, the movie was just fine.  The pacing was a little strange – at some points it felt like it was moving too fast, and at others, too slow.  There’s little to no explanation given for anything, again – I suppose that’s fine for a kids story, but I could have used a little more information here and there. Since a lot of the marketing embraced the "Be A Warrior!" part, I was expecting more battling/warring to be done.  I'm not sure that campaign made much sense. Meg is a 'warrior' in the sense that she does fight the darkness to bring back the light, but mainly within herself.  The movie looks lovely, and the overall message seems to be that everyone is worthy of love, and that love and light will heal the universe, so hey – I can definitely get behind that. 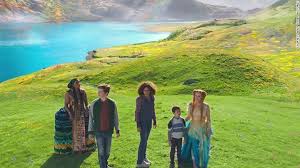 Posted by Jeanette Ward at 1:06 PM

Email ThisBlogThis!Share to TwitterShare to FacebookShare to Pinterest
Labels: Wrinkle in Time: 6/10