The novel Jurassic Park was written by the amazing Michael Crichton in 1990.  Crichton was an incredible man – Harvard Medical School, practicing physician, and the only man to have works simultaneously charting at number 1 in television, film, and book sales (ER, Jurassic Park, and Disclosure).   I love almost all of his books (I didn’t like State of Fear or Next), but Timeline is my favorite (better than the movie).  Among his books are Andromeda Strain, The Terminal Man (1972), the Great Train Robbery (1975), Eaters of the Dead (1976, the movie was called the 13th Warrior), Congo (1980), Sphere (1987), Jurassic Park (1990), Rising Sun (1992), Disclosure (1994), The Lost World (1995), Airframe (1996), Timeline (1999), Prey (2002), State of Fear (2004), and Next (2006).  Pirate Latitudes and Micro were published posthumously based on stories he had started.  He was an incredibly smart writer who began to realize how to write his novels so that they would quickly and easily transfer to movies.  Because of this, it’s very interesting to read Jurassic Park, which is written with chapters upon chapters of science, then chapters of action.  Then, if you read the sequel, The Lost World, the science and the action are more equally mixed – to make for an easier transition.  The majority of his later books are like that (someone please make Prey).


In any case, the movie Jurassic Park came out in 1993 (holy crap, it’s 20 years old).  It was directed by Steven Spielberg, with music by John Williams (like most Spielberg movies), practical effects by Stan Winston and his studio, and visual effects by ILM.  I remember seeing it in the theater 20 years ago (seriously, that is crazy), and being completely blown away.  When it came out, it swiftly became the highest grossing movie worldwide, eclipsing ET, and later being beaten by Titanic.  It had two sequels, the Lost World (very loosely based on the novel), and JP3 – which had even less story and more people being chased by dinosaurs, which is all we really wanted.  For the record, there is actually only 15 minutes of dinosaur footage in Jurassic Park – 9 minutes animatronics and 6 minutes CGI.  The T-Rex was astounding, but the animal that sticks with most people is the velociraptors, both in the book and the movie.  Real velociraptors were turkey sized, the animals referenced in the movie are Utahraptors; size enhanced for the movie because that looks better – and called Velociraptors because it sounds better than Utahraptor.  Although, in the book, they are particularly menacing because they are deadly, but not massive.  They are also more terrifying in the book by sheer numbers as they are breeding more than any other species, because raptors love breeding. 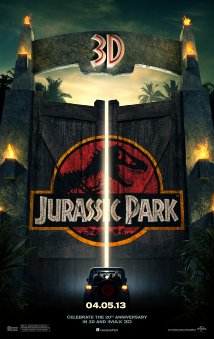 Jurassic Park is currently out in theaters again – to celebrate the 20th anniversary (when did I get so old?) and converted to 3D.   In case you never saw it (what’s wrong with you?), here’s a quick summary of the plot:  Scientist uses dinosaur DNA that he collects from mosquitos trapped in amber to clone dinosaurs and set them up on an island he owns off the coast of Costa Rica.  Accidents happen, a workman dies, and the investors send in a lawyer to bring in ‘experts’ to sign off on the park as safe.  The three experts, the lawyer, and scientist’s grandchildren set off to tour the park.  Due to a bad storm combined with a saboteur, things go bad – quickly.  Then people start being chased by dinosaurs.  The best description is actually offered up by Jeff Goldblum’s character in the Lost World, “…that’s how it all starts with oooing and aaaahhhing…but then later there's the running and the screaming…”  That statement is accurate both for the first movie and the second, which features some dangerous running in tall grass, because raptors love tall grass.


There’s no debating that Spielberg is easily one of the best directors working.  This movie is no exception, despite the fact that he uses a few easy to find tricks to enhance the story.  The subtle and slow push in on a character as they say something important is my favorite.  It is used many, many times in the movie.   The dinosaurs, both practical and visual effects, are stunning.  It is pretty easy to tell the difference between them – the best sequence for that is the initial T-Rex attack, “that’s the practical robot T-Rex, that one is a computer effect – back to practical – back to CGI!”  By the time JP3 came out, it was way more difficult to tell which was which; especially the scene where the raptors surround the actors. Some of those raptors are practical and some are visual.  They are all more colorful and fancy in that movie because by then we learned that raptors love feathers.  The movie was shot on location in Hawaii, and then in soundstages at both Warner Brothers and Universal Studios in Hollywood – take the studio tour when you get there, they have some fun JP bits on the tour, as well as the JP ride, in which raptors pop out at you as you go up a huge incline, because raptors love popping out and scaring you.


·         Sam Neill plays Dr. Alan Grant, a role that both William Hurt and Harrison Ford turned down.  He is a character inspired by John Horner, a real dino expert who helped as an assistant on the movie.  In the book he loves children.  In the movie, he starts out not liking children, then learns to like them as he takes care of the children throughout the course of the movie. 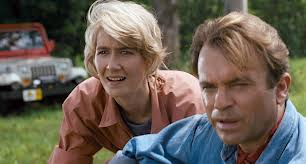 ·         Laura Dern plays Dr. Ellie Sattler, the paleobotanist.  In the book, she’s much younger than Grant, and his protégé, however in the movie they seem to be “together”.  She starts off a little weak, but then gets pretty badass by the end of the movie, having to close a raptor in the shed where the fuseboxes are.  Why are the fuseboxes in a shed far away from the main building?  Who knows.  Besides, it doesn’t really matter that she shuts it in there, because of course, raptors love learning to open doors.


·         Jeff Goldblum plays Dr. Ian Malcolm.  His character seems to be the most like the character in the book.  Malcolm is a chaotician who comes to the island predicting disaster, and is right about it.  He is the rock-star scientist, and survives a T-Rex attack to come back for the sequel. 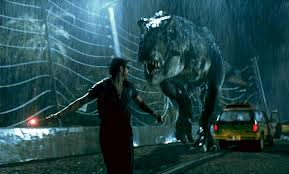 ·         Richard Attenborough plays John Hammond, appearing in a Spielberg movie after beating Spielberg for the best directing Oscar previously (Attenborough directed Ghandi, and beat Spielberg for ET).  In the book he gets killed at the end by tiny compys.  This death scene is re-worked for Peter Stomare in the sequel.  Attenborough plays the role great, starting off as confident and pompous, then over the course of the movie realizes he should not have been messing with nature.


·         Bob Peck plays Robert Muldoon, the big game warden of the park.  He predicts danger from the beginning, gets one of the slow camera push-ins as he describes how smart the raptors are, as well as possibly the best line of the movie, “Clever Girl”.  He does help to build the myth of the raptor by explaining how the raptors are working on outsmarting the people in the park, because - raptors love being smarter than everyone else.


·         Joseph Mazzello and Ariana Richards play Tim and Lex.  Mazzello can also be seen currently in GI Joe Retailiation as Mouse.  There is not much to say about them, just that they play the kids terrorized by dinosaurs.  Incidentally – the movie is a legitimate PG13, there are some truly scary parts.  On the off chance that you haven’t seen this yet, don’t take your kids without checking it out first to see if they can handle it.  It is not a kids movie, despite the marketing.  The scene in the kitchen is especially frightening, where the raptors chase the kids around until they are distracted by a ladle, because raptors love soup. 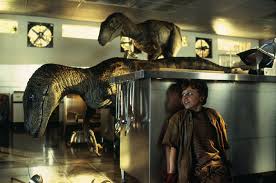 ·         Samuel L. Jackson plays Ray Arnold – or, you know, plays Sam Jackson as a computer expert running a park.  Also, the great line, “Hang on to your Butts”.  He also, I believe, is the first two - Chrichton film actor, being in this and Sphere.  It would seem that he gets eaten by a raptor, all but his hand, because raptors do not like hands.


·         BD Wong plays Henry Wu, the geneticist who assures everyone that because the dinosaurs are genetically engineered to be all female, there is no way, absolutely NO WAY they could be breeding in the park.  He also supervisors the scene pictured below where the gang witnesses a baby raptor being born, then proceed to handle it a lot, because baby raptors love being manhandled. 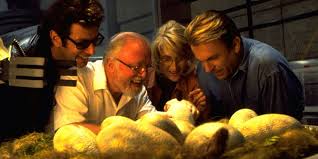 ·         Wayne Knight plays Dennis Nedry, the saboteur who starts the whole mess.  He is attempting to steal some dino embryos to give to a rival genetics company.  Then, there’s a storm, and he knocks over a roadsign with his jeep to get lost in the park, then gets spit at by a dilophosaur. 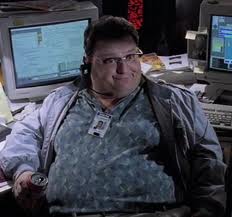 This movie is one of my favorites.  It’s so fun, the effects are amazing, and while the 3D isn’t overwhelming, it does add to some of the scenes.  It looks beautiful, and it’s worth it just to see it on the big screen again.


8 out of 10.  Honestly, I prefer more dinosaur action, which is why I love JP3 so much.  Gained points for the dinosaurs, all of them.  Lost points for the fact that really, there is only 15 minutes of dinosaurs in this movie.  Gained points for Jeff Goldblum – he’s fantastic.  Lost points for Laura Dern being mostly forgettable until the last 20 minutes of the movie.   Lost points because I actually expected them to tinker with the movie and either add more dinosaurs, or freshen up the dinosaurs.  They are all fairly brownish/greenish in Jurassic Park.  I'm so used to George Lucas fiddling with his movies and re-releasing them, that I just assumed there would be more 'stuff' in this one.  Or at least, more raptors...because raptors love being added in post.
Bonus Video 1:  Weird Al’s Jurassic Park.


Bonus Video 2:  Check out all the "How It Should Have Ended" videos, but I love this one:
Bonus Video 3:  Other Michael Crichton based movies…
Thirteenth Warrior (Eaters of the Dead - the movie is better than the book - the book is all first person)
Westworld (he wrote the movie, not sure if there is a book)
Congo (the book is better)
Sphere (the book is better, and really, almost impossible to translate to film)

Posted by Jeanette Ward at 3:55 PM